This past Saturday I ran in the Rock the Block 10k.  It was around 70 degrees and overcast, 10-15 mph winds and extremely humid.  The race had a late start (8:45 am) with a 5k starting after us at 9.  I got there in plenty of time to find parking and get my warm-up in.  I ran about a mile, then did all my dynamic warm up moves.  I had a good sweat going when the air horn went off.  And I would only get sweatier. 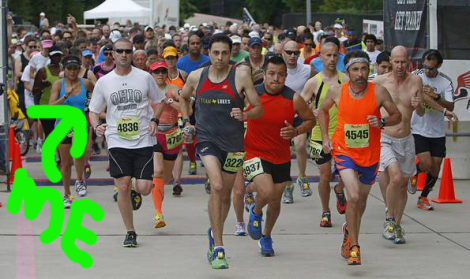 And we’re off! -Photo from Dallasnews.com

I went out too fast.  6:30 for the first mile.  In fact, I was running in a pack with another dude and a little (probably 12 years old?) girl.  As we started to slow a bit the second mile, an older man passed us and yelled, “You need to work on your pacing.  You’re a great runner, but you went out way too fast.”

He was yelling at the girl, but he could’ve meant any of us.  I hope she didn’t cry later.

Then we passed the turn off for the 5k finish and man, it was tempting to take it, haha.  But our work was just starting.  By now I’d left behind my earlier pack and drafted off a couple teenagers, until they faded.  I continued to run the race this way – letting others ‘pull’ me along until they eventually faded.

The course was a bit hilly and there were several 180 degree switchbacks.  I gotta say, there’s nothing worse than running and having to stop your mo’ so you can turn completely around to run the other direction.

The wind was in our face the first half and at the turn round, it was at our back.  I tried to let it help me finish.  I also thought about some other blogger friends who I knew were racing this past weekend like Salt and Kristin.  That helped give me motivation when things got tough.  I also saw a few friends running on the course – they shouted encouragement and that also helped!!!

Funny story – as I passed a friend, she tried to yell “Great job Scott” but got it mixed up with ‘Great Scot” and ended up coming out something like “Greasc!”  Hahaha!

But then with about a mile or so to go, our race merged with the 5k.  Ugh.  I hate that.  A lot of them were walking by this point.  I had to do a TON of weaving and yelling, “On your left!”

I hope they didn’t cry later.

Anyway, I knew by my watch that I was close to a PR, so I blew off any water stations and just kept pushing.  It paid off!

I has happy with the result.  I wanted to run an average of 7:15 per mile pace, but ended up at 7:18-19, so pretty close!  Although I am disappointed in myself for foolishly running a positive split (first half of race faster than second half).  I really need to work on my 10k race pacing (like the old man yelled). 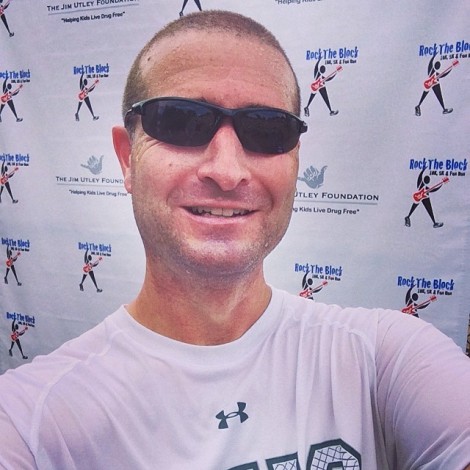 So sweaty. Who wants a hug?

In the end, it was a good time.  I saw lots of friends there and got a PR on a challenging course/conditions.  And best of all, the proceeds go to a really good cause.  You can find out more about the charity HERE.

I’m also still in awe of the fact that I ran a race with an even time:  46 minutes, 00 seconds.  That has NEVER happened to me before.  So crazy!

How bout you?  Ever run a flat even time?  Ever make anyone cry in a race?  Ever run anyone over (or get run over)?