Posted on December 4, 2012 by piratebobcat

Believe it or don’t, but this was my first ever 10K.  Done tons of other K races, but this was my first time to race 6.2 miles.  Bad news is that I hadn’t trained for this distance at all.  I was still taking a break from doing three 1/2 marathons and one full marathon in the span of 4 months.  So not quite ready for this.  But it was for a good cause and the medals were cool. 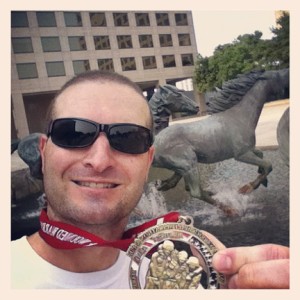 I barely escaped being trampled by the galloping metal ponies!

The race was in Irving, TX and ran down their new hike and bike trail.  It was nice, but the paved trails didn’t seem wide enough for all the runners – especially after we hit the turn around and were running upstream (on the right side) on the way back.  And B to the W, there was no chip sensor at the turn around or on the trail at all that I saw.  What’s to stop someone from turning around early?  I don’t doubt there were some cheaters out there…and not just the kind from the TV show.

And can I just say that a summer run in Texas is going to be hooottt.  Holy sun-oly!  I’m not ashamed to admit I had to stop and walk through the water stops.  I was hurting from not being in shape for that distance and from the heat.  My god, the heat!  And it didn’t help that the race started waaay late.  The sun was up and in full effect by then, dude.

But I got done with a PR (remember, it was my first 10K) that I have since shattered by like 5 minutes.  So all’s well that ends…well.