Running: Back on (the) Track!

So I’m driving home the other day and I pass a middle school track where I sometimes go to do track workouts (coincidentally enough).  But this day, I had already done my workouts, so no need to stop.  But then I noticed a friend of mine flying down the straight-a-way.  His name is Bob Smeby, he’s fast.  Here’s his Athlinks page.  Notice all the first place finishes.  He’s in his mid 50’s but still runs around a 6 minute mile.  Like I said, he’s fast…probably because he practices getting faster by doing track workouts.  Funny how that works – put in the time and effort, get the results.

The next day I messaged him to say I saw him on the track, and he invited me to run with him next time out.  I agreed.  I hadn’t been on the track since the fall, but I do enjoy it.  Training for long races like marathons can involve some loooong slow runs.  That’s why I like doing track workouts – it’s a chance to go a short distance, and go it fastly!  Plus, I was a 4 year letter winner in high school track.  So obviously, it’s something I’ve always enjoyed. 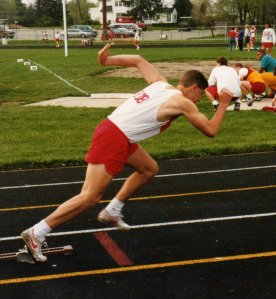 Smokin’ fools in the 400 in high school.

If you’re a runner and  you don’t do track workouts, you’re missing out.  They usually involve going almost all out for a determined distance, then “recovering” with a short jog.  Repeat.  Are they hard?  Yes, yes they are.  But they really can help increase your per mile pace. Not only that, but doing that sort of explosive burst interval work is the number one way to burn fat.  And who doesn’t want to burn fat?  Besides Manny Yarbrough, that is. 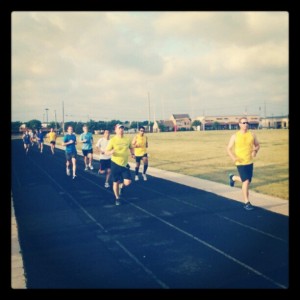 Smokin’ fools at a recent track workout. *Thanks Runner Girl Chels for the pic!

But then the day arrived for my first track workout in months.  I realized that I’m going to be running alone with a really fast person.  I didn’t want to be the only one puking on the infield, so I invited some other peeps.  Granted I didn’t give them much notice, but nobody else was able to make it.  My one friend even said, “Are you CRAZY?!?!  You’re doing a track workout with Smeby?!?!”

But it was all good.  We did a mile or so warm up, then Bob changed into his spikes…yes, he brought spikes!  We did 10 x 200 with a 200 jog in between.  If he hadn’t been there, I would’ve quit after 8…or 6.  Another advantage to running with others – accountability!  And our pace was pretty good too!  Bob had me start a little ahead of him and told me not to let him catch me.  He spent the whole workout trying to chase me down and I spent it trying to hold him off.  We both got a great workout.

Next time out, we hope to have some more peeps out there for a mid week fat burn/speed increase.  I don’t know what our workout will be, but it doesn’t matter cause I know it will be hard, but fun!

Holla if you want to come run in circles sometime!