Music to Run By

OK, so I’ve been out of the on-line world, and the running world, the past nearly two weeks.  In my soccer game back then I did something to my ribs, so I took a few days off to heal.  THEN I got sick for the first time in as long as I can remember – probably first sick day since 2006.  I’m sure there’s been a couple here and there, but maybe not.  The reason I remember it so clearly is that it was pneumonia – and it was nasty!  If you can avoid getting that, then take my advice and do so! 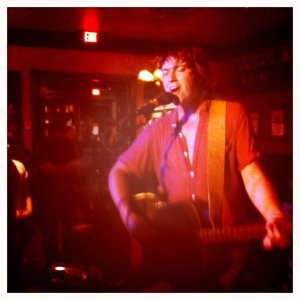 Sorry I couldn’t get any closer than two feet away for a picture during this performance.

Anyway, this time around it wasn’t pneumonia, but I had a fever and low energy, etc.  So I took some time to get better.  Right before I got sick though, I went to see the Old 97’s perform.  If you haven’t seen them, they are FUN!  You might remember them as the band Jennifer Anniston and Vince Vaughn kept talking about in “The Breakup”.  In fact, one of the times I met their lead singer, Rhett Miller, he told me the writers of that movie had been listening to their music the entire scripting process.

Told ya that I’ve met ’em. Stop doubting me.

I can’t even count how many times I’ve been to their shows, but if you are not familiar with their music, I’ve got at least one song of theirs you need to add to your running playlist.  It’s called Time Bomb and it is PURE energy!  Below is a live performance of it that should give you an idea, despite the less than stellar audio quality.  Note the sweatiness of Rhett…a staple of his high octane shows!

Fun fact…I don’t know who took that video and posted it on YouTube, but it is a coincidence that the venue (Newport Music Hall – Columbus, OH) is indeed the exact same place I saw my first ever concert way back when.  Care to guess who it was?  I’ll give you a hint, his initials are Weird Al Yankovic.

I don’t know if any of Weird Al’s music would help me run.  Will have to go through my old cassettes to find out.