If you’ve been following my blog for any amount of time, then you know that I have a slight taco obsession.

These ain’t yo mama’s tacos.

I like how they can taste so sinful, but be somewhat healthy* – lots of veggies and lean proteins.

*If you make smart menu choices.

By buddy and I about to fill our taco holes.

When I was training for the Dopey Challenge last year, tacos were often my reward for my back to back to back long runs.

A popular place around North Texas to run is called White Rock Lake.  You can get many miles in there. 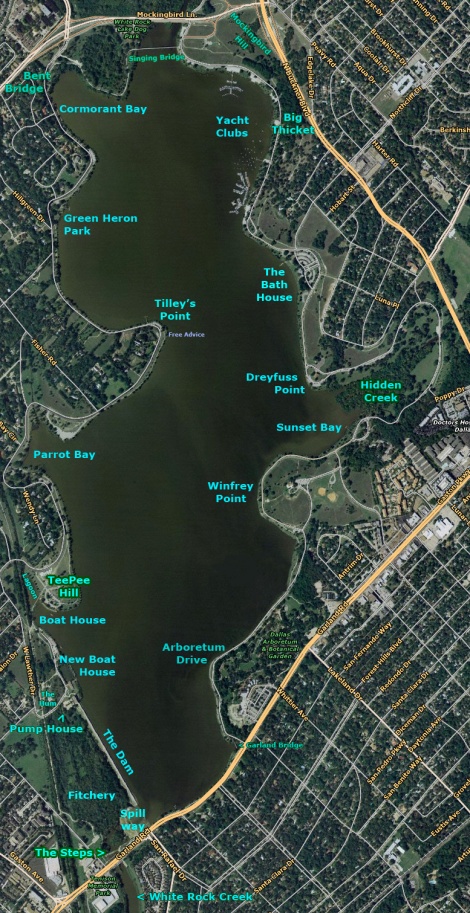 9 miles around with plenty of connecting trails to add more mileage.

The best part though, is that around the lake are several taco joints!  Perfect for recovery treat right after a long run. 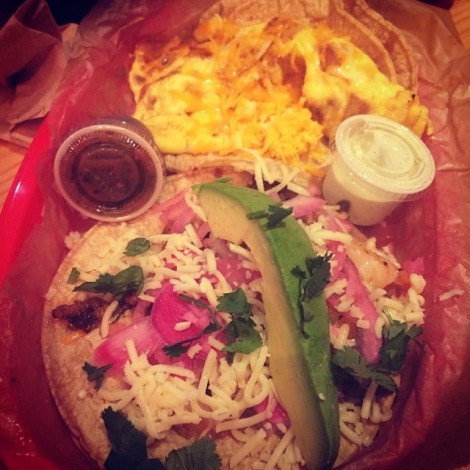 Since I have experience with running on tacos, here’s my tips for the taco ordering.

#1 – Avoid flour tortillas.  They ain’t good for you.  The white flour is bad for you.  The trans fats are bad for you.  I always ask for soft corn tortillas – which aren’t necessarily the best thing for you either, but it’s the better option.  Or you could always just eat the innards with a spork…like I’ve been known to do… 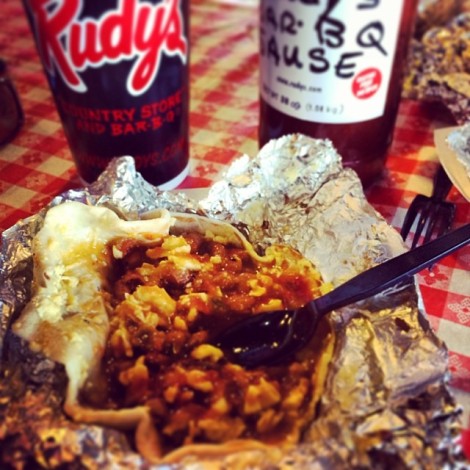 #3 – And a lot of these tacos have plenty of veggies involved.  But I always drown mine in salsa regardless – more veggies!

Veggie on the left – Ahi Tuna on the right.

I apologize in advance for making everyone hungry, as I’m sure I’ll hear about in the comments.  But I couldn’t help it.  I was thinking about this post as I was devouring the tacos in the following photo…

These poor guys weren’t long for this world.

Now, I would like to invite anyone reading this to join me for a run followed by tacos.  Just let me know when you’re coming to town!

PS. Looking back on this post, I think Torchy’s and I have a special relationship.  I’m fine with that.

Posted on September 5, 2013 by piratebobcat

One time in Scotland visiting a friend, we were going to get something for dinner and she said, “Fancy an Indian?”  I thought that was a strange way to ask someone if they want to go to an Indian restaurant.  They may have invented English on that European island known as Great Britain, but that doesn’t mean they don’t screw it up sometimes!  Anyways, we did fancy an Indian, and it was delish.

I love Indian food, and I love how they have so many vegetarian options.  So that’s what I made last night.  I was pretty lazy about this dish, but here it is.  In a pan I threw in a bag of organic mixed veggies and sliced baby bella shrooms.  Then a can of coconut milk.  A little stock.  And a bunch of spices – curry, tumeric, garam masala, etc.  Brought it to a boil and then lowered the temp and simmered until I felt like it was done.  Steamed up some brown rice and spooned the curry over top.  Simple, easy, quick, and lazy.

I took a picture, but won’t share it here as Indian food doesn’t always look beautiful, but it sure does taste good!  And so healthy – they say it has cancer fighting capabilities.  And the brown rice will give me the carbs needed to get through today’s gym sesh and evening social run.  And I need the help because it’s still 100 degrees outside!

Speaking of hot, no, the curry was not spicy.  People think that all curry is spicy, they ain’t.  I left it mild out of respect for the others in our house that I knew would be eating it.  In my bowl however, I added a good amount of dried spicy spices.  Yup, papa likes it HOT!  Food that is, not running temps.

All for now, buh bye.

I’ve never been a big meat eater…well, except for growing up when that’s all that was in the house, and not to mention – what American teenager doesn’t half-live off of fast food?  But when I got older and wiserer and healthier, I pretty much cut out all red meat.  I can probably count on one had the number of times I’ve bought cow meat over the last decade.  Not that I’m totally against it, but the garbage they sell in most groceries and restaurants is most likely not going to be pure, or even real meat.  Now if you have access to naturific grass fed beef, then that’s supposed to be good for you.  Most people don’t around here though…which is sad to say considering I live in the Capital of American Meat – Texas.  But before I continue going off on this tangent, let me stop myself.

Back on track.  I had always stuck to lean meats like grilled chicken breast for most of my adult life.  But I’ve come to learn that that is not necessarily good for you either.  I’ll stop myself before I get into the way that meat is raised, processed, treated, etc. now too.  Just know that I was the indirect cause of death for many a fowl.  But lately I’ve even pretty much given that up too.

Where I’m at right now is I want to stick to (not fried) fish, eggs and vegetables and fruits.  Of course, I could go off on rant here too about the farm-raised fish, industrial-produced eggs, GMO veggies, etc. etc.  But I’ll leave it at this one tip: when buying fish to eat, whatever you do, and I can’t stress this enough, please stick to Wild-Caught fish!  And don’t be tricked when they tell you it’s market price or Atlantic Salmon for examples, because those most likely come from a fish farm too.  Tricky bastards!!!  I won’t get into the reasons why Wild Caught is better, but trust me, it’s a huuuuge difference!

I find that since I’ve been sticking to plants, I’m feeling lighter and healthier.  And of course there’s all the environmental and moral factors that can make you feel better about eating vegetarian too.  But that said, and like I said, I’m not totally against eating meat.  I’m still going to occasionally eat chicken wings when I get a hankering, or a turkey burger here and there.  I’m not going all or none.  I’m just going to try and stick to veggies most of the time.  Hopefully that will put me a head of the game when you consider that some doctors recommend you only eat meat every other day, and when you do, it’s only a few ounces of it.

All that said, I know the number one question people ask vegetarian athletes: Where do you get your protein?  Not to worry, vegetables have PLENTY of protein.  I can eat the crap out of some hummus, which is made with chickpeas, which have a crap ton of protein.   That’s just one example.  So if you’re considering going veg, then don’t worry about that.

I must confess though that several years ago I asked that very question to someone.  I was back stage before a Def Leppard concert cause my friend was married to the guitarist – who was a vegetarian.  We went to his dressing room where he was shirtless and ripped and dripping with sweat.  Apparently he had just finished working out.  Seeing how buff he was, and how much he works out, and knowing from his wife that he was a vegetarian, I asked him how he gets his protein.  I wish I hadn’t asked now, knowing it’s kind of a silly question.  No matter, it was a fun night!

And yes, I know that vegetables can be prepared in a way that they aren’t healthy anymore – like french frying a potato.  So I’m not under any assumption that just being vegetarian automatically makes you healthy.  But I’ll leave you with this story:

A few years back I was going for a run when I past two little boys playing in their yard.  They must’ve been around 7 years old.  They stopped playing when I ran by and watched me run.  One of the boys then asked me a question that I never forgot.  He must’ve thought that as a runner I must automatically be healthy (not necessarily true) and that being a vegetarian would be part of that healthy lifestyle.  But he wanted confirmation so he asked, “Hey mister, are you a vegetarian?”  “Sometimes.” I responded.  “Cool.” He retorted.