So I’m still working on organizing all my pics and vids from the Disney Marathon, so I haven’t blogged about it yet.  But looking at some other reviews of the race made me realize that we were in the presence of some celebs.  I’m not talking running celebs and elites, cause I’ve run races with plenty of them (Frank Shorter, Jeff Galloway, Bart Yasso, etc), but actual Hollywood types.  I live in the Dallas area, and don’t get to run with as many as if I lived in NYC or LALA Land, but I’ve raced with a few….and have beat them all!!!  Haha.

First was the Rock n Roll Dallas Half Marathon a few years ago.  Troy Aikman was also in it.  My sis and I beat him by 15 seconds or so.  Yup, we’re faster than a world class athlete, lol.  Then my sister followed that race up by beating him again by a few seconds a few weeks later in another half at Cowboys Stadium.  Here’s a photo of them next to each other after finishing:

Based on running times alone, I’m athletic enough to quarterback the Cowboys.

But Disney had pulled out all the stops and starts for the 20th anniversary of their marathon, and some running celebs wanted to be part of it.  A bunch were running the half, but Sean Astin and Drew Carey were signed up for the Goofy Challenge (Half on Saturday, Full on Sunday).  Unfortunately Sean had to pull out due to a gig.  And Drew had to pull out due to an injury.  Though being the cool guy he is, he still showed up to cheer on the runners and party with them afterwards.  Here’s a pic from when I met him a few years ago (before losing weight and taking up running). 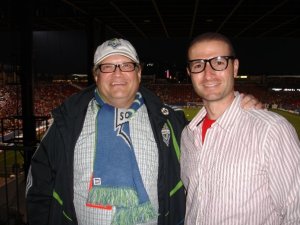 As for Sean, he showed his support through twitter.  He even responded to one of my tweets when I told him the hot conditions wreaked havoc with my per mile pace.  He helped put it back into perspective:

It’s a shame he wasn’t able to run, but we runners appreciate his support.  I was a little bummed because I have met the real Rudy and was hoping to get a pic with the fake Rudy.

He really was five foot nuthin, and a hundred and nuthin.

Also of note, Joey Fatone ran the Goofy Challenge.  Now he’s not a runner – this was his first half and full, but he did it!  He ran in place of his injured wife and followed the Jeff Galloway walk/run method.  So needless to say, we beat him in the full – another feather in our caps…haha!  (Now if only I had use for these feathers)

It’s the guy from that boy band – I think it’s named – My Big Fat Greek Wedding.

Anywaddle, I’m always glad to see celebs out there promoting running and being healthy.  I really appreciate their support of the sport, and it’s great to see how they like to run just as much as some of us!

That’s all for now because I have to go and pick up all those names I just dropped.

Posted on January 4, 2013 by piratebobcat

I live in the Dallas area, so it’s easy for me to run the Dallas Half.  I love Nawlins, so it’s easy to talk me into going to the big easy to run that one too.  Haven’t done any other cities’ as of yet, but running these two five times has given me some perspective. Don’t believe that I’ve run them?  Check out these videos:

First off, me thinks it’s a little sad that one race is kind of taking over the country and globe.  It kind of loses the local ownership when a chain takes over.  Kind of like the Walmart of racing.  That said, they do a decent job of it.  They do retain some of the local flava flav.  I must say though, out of the two cities, the New Orleans race is funner and more localer.  I guess that’s not fair to compare, as the city of the crescent is going to have an advantage over most other cities, no matter what the event!

I do like how they have bands along the course.  Though I do feel sorry for them because most people only get to hear about 20 seconds worth of their music as we run past.  But, a gig’s a gig I suppose.  The major draw they advertise is the “headliner” band that plays at the finish line.  I put “headliner” in “quotes” for a “reason”.

Here’s the good:  Dallas – Better Than Ezra.  Better than I expected.

Dallas – Bret Michaels.  Wasn’t a fan before the performance, but he genuinely put on a good show!  Seemed to be really enjoying it.

He spells his first name with only one “T”. Maybe I should go by Scot? 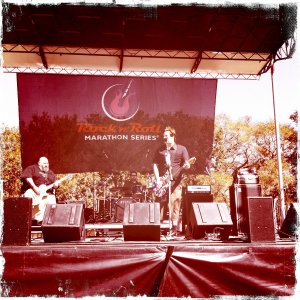 Bowling for Soup, blowing away the crowd!

Here’s the OK:  New Orleans – Rockin Dopsie Jr. and the Zydeco Twisters.  I only categorized them as OK, because I don’t consider them a “headliner”.  They put on a great show fo sure and were no doubt local, but I wouldn’t pay $40 to go see them.

Here’s the bad:  Dallas – Oh gosh, I forgot his name.  He was the “headliner” for 2012.  I had never heard of him, but apparently he was like the 4th place finisher on American Idol.  Never seen that show.  Didn’t see much of his concert – I actually thought he was the opening act.  Our city got jipped when you compare to what some other cities got.

But anyways, it’s all good.  I do have to give the advantage for post-race concert to New Orleans though.  Here’s why:  when you finish the race you’re at the Old City Park.  About a .75 mile walk from the shuttles, so everyone stays.  When you finish the Dallas race, you’re like a .05 walk from your car in the parking lot, so everyone takes off.  In New Orleans, you’re almost forced to stay and party.  And they do party.  When there’s not open container laws, it makes it easier to get down and funky in public! 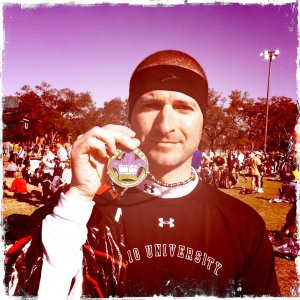 The medals are pretty cool.  I like how they change them every year to try and represent something local.  I have to give an advantage to Nawlins tho.  Why?  They use beads for the ribbon and I am a SUCKER for the fleur de lis, and in 2012, they had one on it.

That said, I still like the Dallas ones too.  And an advantage is that usually I gots family waiting at the finish line.

The course also has to favor New Orleans.  It’s really pretty running through the Garden District and also the French Quarter, which I like to call the Freedom Quarter.  Plus, it is perfectly FLAT.  Where Dallas is a looooong incline.  New Orleans is so flat that several elite runners were there trying to qualify for the Olympic trials.  Several of them did.  Several set records.  Only problem with their course is that the roads in a city built on swamp land are bumpy.  In fact, my friend broke her foot during the race after hitting a bump.  She’s a trooper though and finished anyway!  Also, the Dallas course isn’t exactly scenic.  And I have this question for every single race director in town – Why does each long race have to go up Turtle Creek Blvd?  The houses are nice, but surely there’s other spots to run.

Anywhoodle, the start times also give an edge to Nawlins.  7 am vs 8 am makes a difference heat wise.  Plus we get to the party sooner!  Which also happens on the course itself – lots of people running in costume and spectators handing out beers to the runners!  Oh, and I just thought of a kind of negative about the run in New Orleans – If you ain’t careful, you can really sabotage yourself with rich food, strong drink, and lots of walking and carrying on before the race.  My sis and I made that mistake the first time out – partied too hardy, including the night before the race!

In the Napoleon House Bar. His crazy eyes embraced us after a hurricane or several.

So New Orleans is clearly the winner.  But here’s on bright spot for Dallas – The year that Troy Aikman ran the race, my sis and I beat him by about 15 seconds!  Boo yah!

So long Troy Aikman. My sis and I are takin it to the house…or at least the finish line.

Anyways, I’m just glad there are these opportunities for people to run.  It shouldn’t really be a contest, but I guess I made it one didn’t I?  That said, I did sign up for the Dallas race again for 2013.  Why not?  I’m here.  I’ve run it every year they’ve had it.  Maybe they can make up some ground on The Big Easy.