I’ve been cray cray bizzay. Let’s catch up, shall we?

Chicago Marathon training has kicked in and I’m pretty excited about it. For this, I’m going to continue to do my long runs whenever I can with WRRC. Solid folks. 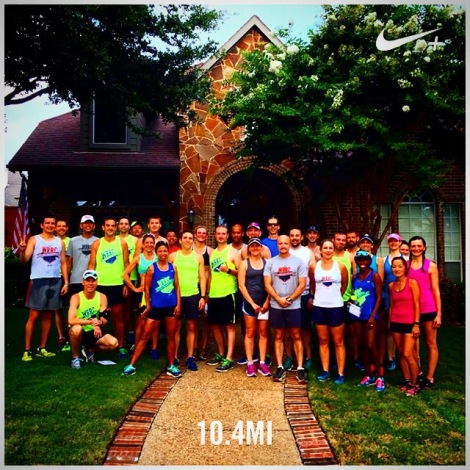 It’s summer now, and that means they do a lil’ thang called “Run My Hood”. Basically, each week we meet at the house of a different runner and run their favorite neighborhood course. It’s pretty cool. I’ve often thought on my own neighborhood runs how I’d like to show other people “my route”.

Anyway, the best part of the run is the after-run. Hey hey, pool part-ay today-hey! 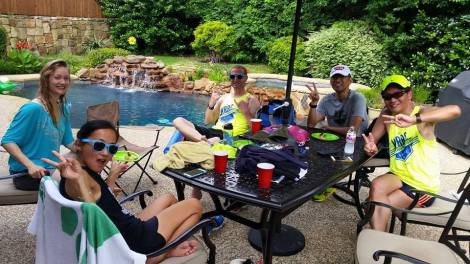 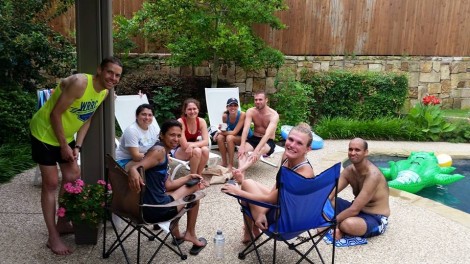 As always, I like to incorporate cross training into my…well, uh, training. The trails are all flooded in North Texas, so that’s a no-go. But it can’t rain in yoga class (well, except maybe rain sweat). 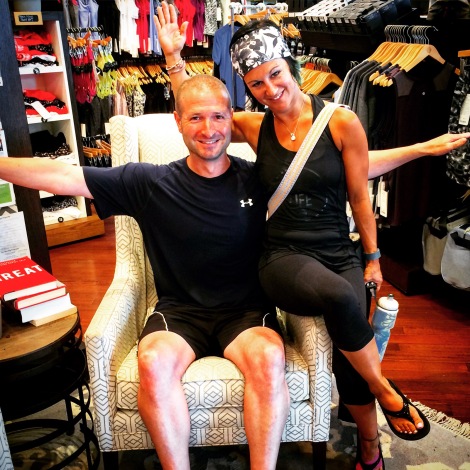 My elf friend and I finally mastered “Partner Chair Pose”.

And I gots to give a big shout out to Lululemon. At yoga practice the other day, the employees called me up to the front. They said they wanted to thank me for being a regular yogi, “Go pick out any yoga mat…it’s yours!” I was so surprised and honored…and PUMPED! 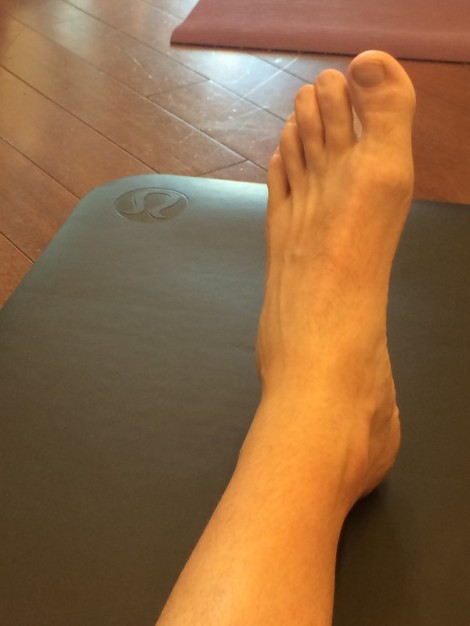 The mat my foot finally chose.

It was so cool of them to do that. And I gotta say, this mat is like night and day compared to my old one…or is it like day and night, IDK. What I do know is the quality of this mat is top notch. No slipping when I sweat, good padding, solid construction – just incredible.

And bonus, my looooooong time friend (you can see her in a couple group run pics above) has been at these yoga seshes because the studio she goes to and teaches at is putting on the classes! 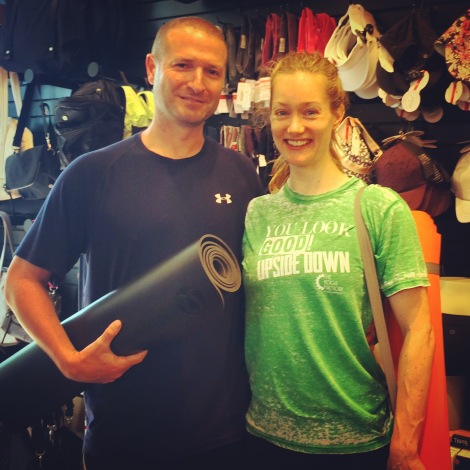 Other than that it’s been sweaty doggy walks. And seeing as I’m an fashion expert, I made a quick tutorial on how to look good as you walk the hound.

Of course there’s lots of other stuff goings on, but I’ll save it for the next post…I don’t want to tire your pretty little heads too much today. Have a great weekend, hombres y mujeres!

How bout you? Ever get to run someone else’s “hood”? Ever been rewarded by a business you regular (other than the corner pub)? Ever Meet Virginia?

Posted on September 8, 2014 by piratebobcat

Another weekend is in the books! Well, not so much a book, but more of a calendar.

Anyway, this weekend was extra epic because the boy had his first soccer match! 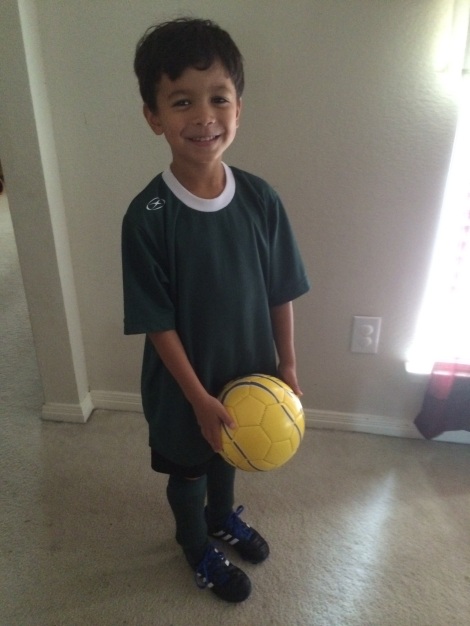 You’ll grow into the jersey.

But before that I was able to get in a short run on Friday as well as 9 miler Saturday morning. I was glad to negative split that fool despite the humidity!

After a shower, we were ready for some football. 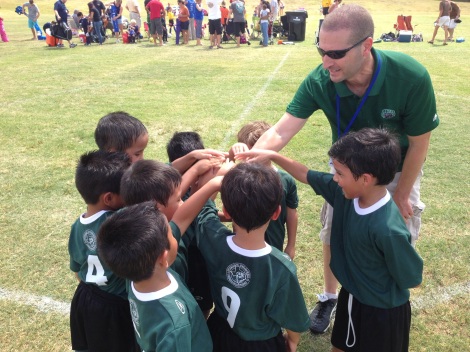 Unfortunately the Landsharks started the season with a loss. And as head coach, I take full responsibility. In my defense though, it’s hard to get a bunch of five year olds to focus on one thing at a time. 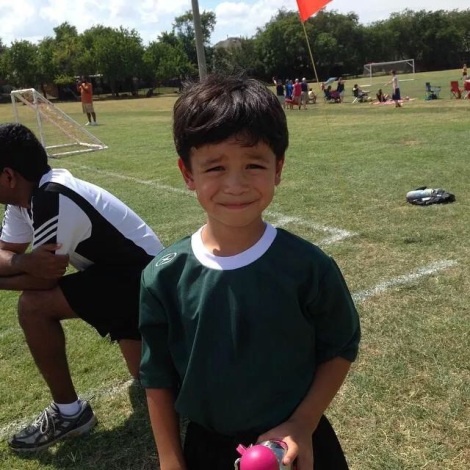 Put me in coach…ooh look, there’s a dragonfly over there!!!

But at least they got a lot of fan support from sister! 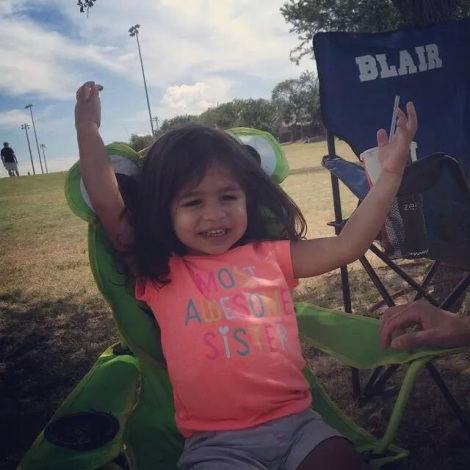 Go team…oooh look, there’s a dragonfly over there!

In the end, they all still had a lot of fun! 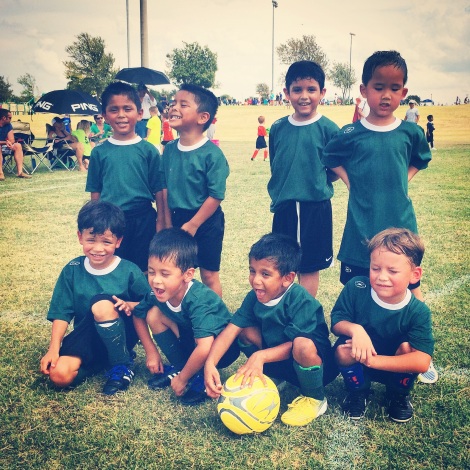 Much like soccer, some of the team are also still learning how to take a photo.

On Sunday I met up with a friend for a trail run.  After a few miles we came across a train bridge/tunnel. Good spot for pictures. 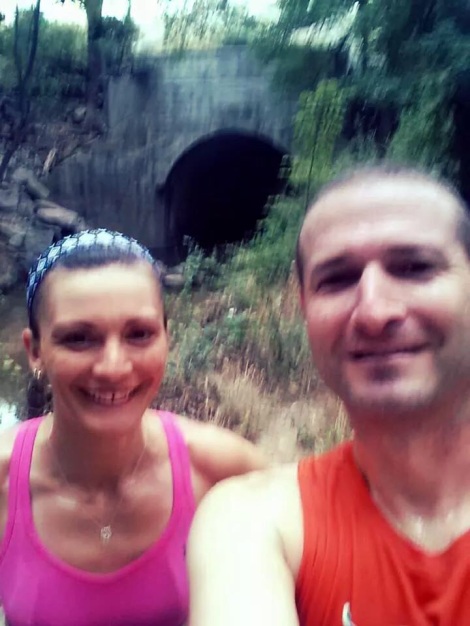 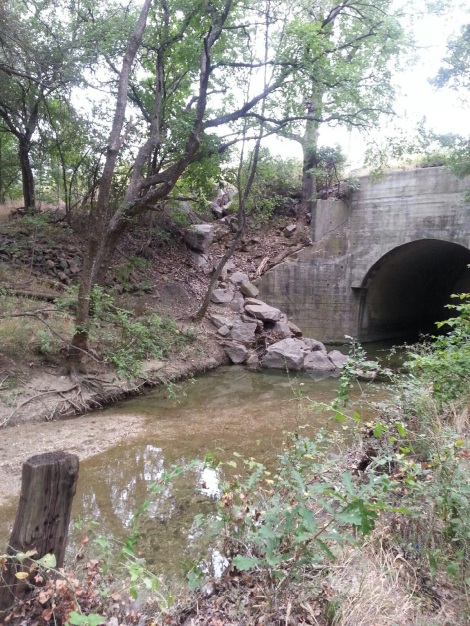 This one feels sharper.

At this spot we heard a waterfall. We climbed over a barbed wire fence and could see it was on the other side of the tunnel. We’d have to climb up and over the tracks to see it. That’s what we tried to do.

Now I’ve been weary of train tracks since my last encounter with them a few months back. But this time I managed not to hurt myself. 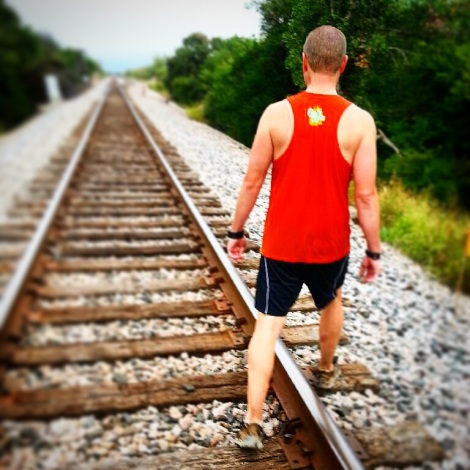 Sometimes I incorporate trail running into my ‘training’. Get it? I know, I’m hilarious.

We never saw the waterfall cause when we got to the tracks I spotted a bobcat on the other side. Usually they run away from humans, but this one stood still. My friend snapped a not very clear pic… 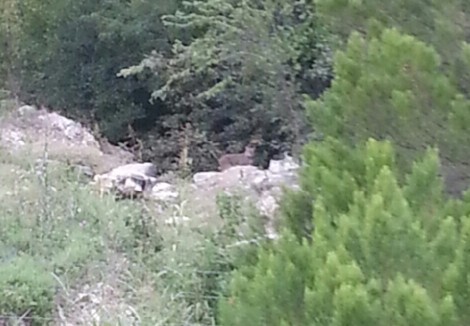 She’s dressed in her cammo.

We didn’t want it to lose it’s fear of humans, so we started yelling and waving our arms to scare it off. It didn’t budge. In fact, it just sat down and stared at us like we were loco.

That’s when we heard the meow-screeches of the bobkittens. They were under the rock she was sitting on. This mama was protecting her litter. That’s why she wasn’t abandoning her den. And we could sense she was losing patience with us being so close. We decided it would be prudent to get out of there real quick like. Like my friend said, “I don’t want to get my eye clawed out by a bobcat today.”

We got back safely and ended up going about 7 miles on the run.

Afterwards it was yoga time. 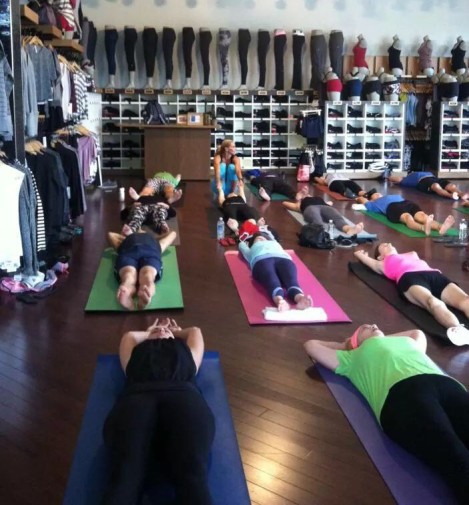 The calm before the pain storm. Oooh look, the shoe lady is back!

The instructor this day put us through a tough tough session. What made it tougher is that she had to leave early, so she squeezed in an hour’s worth of yoga into 45 minutes. This was a no-joke practice. Felt good though (after it was over).

They say weekends are supposed to be relaxing, but mine always leave me sore and tired. Go figure.

How bout you? Crazy weekend? Encounter any wildlife? Any tips to ensure we don’t lose another soccer match?

The other day I just wasn’t feelin another road run for the week. So I ended up going to a local nature preserve to run on their wooded trails. I’m glad I did. Mainly, because doing so makes you foxy. 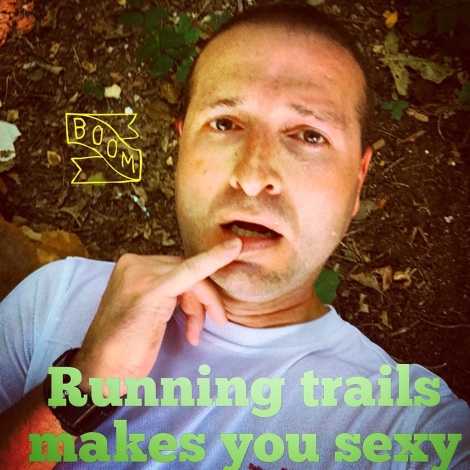 Never mind the sweaty man laying down in the woods.

Trail running always seems to refresh me. It’s good to get in nature. It’s good to dodge plants and rocks and critters and mountain bikers and hikers and other runners. It totally turned my mood around. Before the run I was all like… 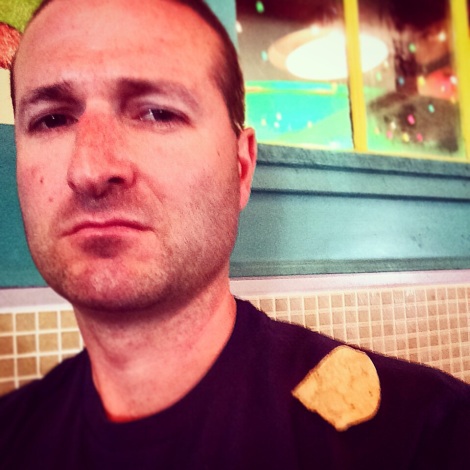 I had a real chip on my shoulder. #tortilla #notpotato

After the run I went and met some peeps for yoga. It was a really good practice. And of course, from a couple weeks ago – you know what yoga does to you… 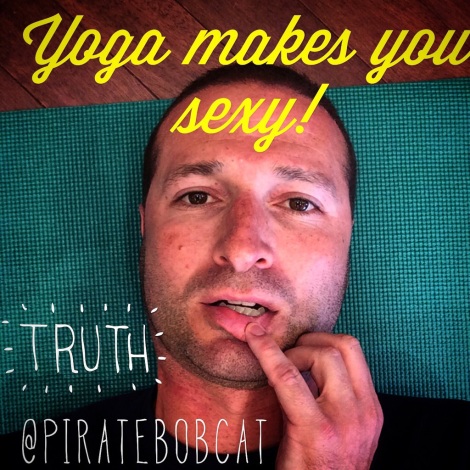 That’s right, I got an extra dose of foxiness that day. Watch out world!

Anyone else ever take a running ‘break’ by hitting trails? Every double dip your workouts?

PS. I apologize for posting such foxy (and not at all creepy photos).

How to Train to be Dopey

So I’m still in “pre-training” for the Dopey Challenge at Disney World in January ’14.  And I’m trying to decide which plan(s) to follow.  I do NOT want to sacrifice my cross training as I believe that is key to avoiding injury for runners.  So however I attack it, I’m going to have to remember to add x-training to the running schedule.

I’ve asked several people how they think I should train for Dopey and I get a lot of this, “You’re on your own on that one, brutha.”  All I know is that I’m going to have to do back to back “long runs” to get my legs used to working when they’re full of lactic acid.  So here’s some plan options:

Here’s another option called the Hanson Method.  They don’t go more than 16 miles in a long run, but do advocate running more miles more often.
http://www.runnersworld.com/race-training/marathoning-hansons-way?page=single

I’m kind of leaning toward Hal Higdon as he has the whole back to back long runs I think I’ll need.  I’ve had a few people recommend his to me.  The Hanson one is intriguing, as I do like the idea of not having to go out on some 20 milers, but also don’t want to have running overtake my entire life – I wish running was my job, but it ain’t.  Galloway’s I think is geared more toward novice level, and that’s great, but I want to be able to run this challenge, not walk/run it.

So that’s what I’m looking at.  Anyone have any suggestions??????  Hollaback if you do!