Posted on September 5, 2014 by piratebobcat

Hey kids, guess what? I just noticed that a few posts ago I wrote my 300th blog entry here. Now I’m at like 306 or something. So that’s good I guess. I just wonder where I’d be at if I didn’t ever take my “break”.

What had happened was that when I started training for my first marathon in 2007, I got bombarded with the same question every day, “How’s your training going?” I decided it’d just be easier to write a blog about it so people could follow along. And so I did…for a few years. But then I had a minor freak out about personal thoughts on the net and deleted the entire thing. All of it gone.

Fast forward a couple years and I got back in the game. It’s been fun. I hope to keep it going. So happy birthday Blog…here’s a cake. 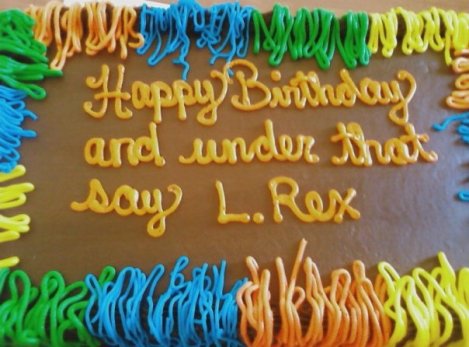 My friend’s “Walmart Cake” I love this. So much.

I was just telling Amy over at Fitness Meets Frosting about that cake, and now she knows I wasn’t making it up!

Anyway, this morning I was on my run and came along the path where I saw the nude photo shoot a few weeks back.

There were no budding artists this time, but there was a horsefly. This thing followed me for a good quarter mile and kept nipping at my head. I got pretty frustrated and started yelling at it.

And finally, “That’s it, you want to come at me bro?!?” I stopped running and turned to fight it.

After a few seconds of flapping my arms about in a manly way, I finally scared it off. I also scared something else. I didn’t realize that behind me was some dude jogging. He had turned the corner to see me swatting at the air and yelling at an invisible foe. He looked at me sideways as he ran past.

Oh well, what ya gonna do?

In other news, Jason over at Must Love Jogs keeps mentioning that he doubts my claims of having met Drew Carey before. Well here’s your proof. (It’s before he lost all the weight.) 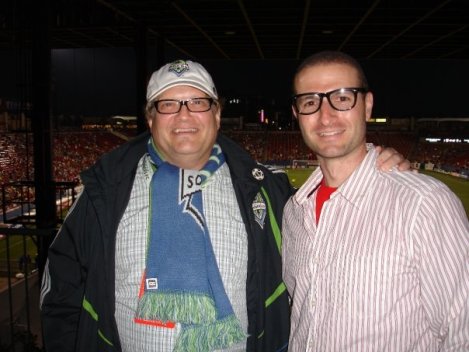 Just a couple Ohio boys hanging out at a soccer match in Texas. Good thing I had my fake Drew Carey glasses handy.

I actually saw him another time at the Disney Marathon (yes, he’s a runner too!). But he was injured and couldn’t run, so instead he was cheering for everyone and high fiving. Pretty cool guy.

And finally, I’ve eaten at like 5 different taco joints this week. Here’s a pic of my favorite. 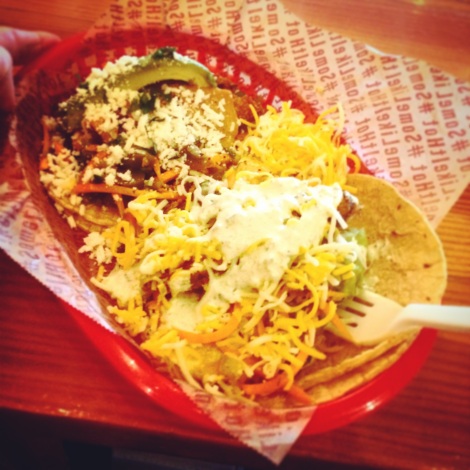 Hope everyone has a great weekend!

How bout you? Anyone else want to question any of my former claims? Ever fight with an insect on a run? Ever get a “Walmart Cake”?

How to Get Free Schtuff

If you follow my blog, or my instagram, or my tweeter, then you know that I’ve been getting some sweet birthday meals this week. 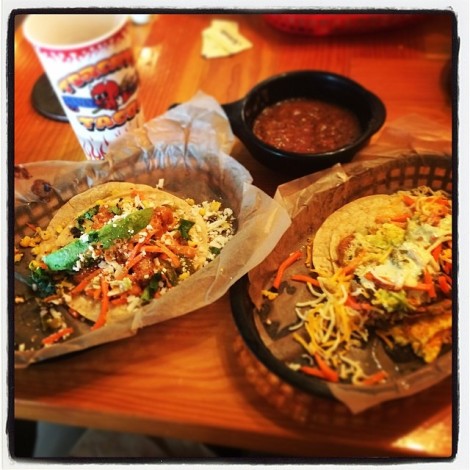 Taco Taco (Bought by a friend)

And here’s the best part – they’ve been FREE!  Here’s how you do it:

1.) Have a friend or family member take you out for your birthday.  Repeat with others (don’t take advantage though – and never ask them to buy you food, duh, rude much)  Easy enough.

2.) Go to your fave places’ websites and register for their e-newsletter or whatever.  Come birthday month, they e-mail you all kinds of coupons and vouchers.  Print them and claim rewards! 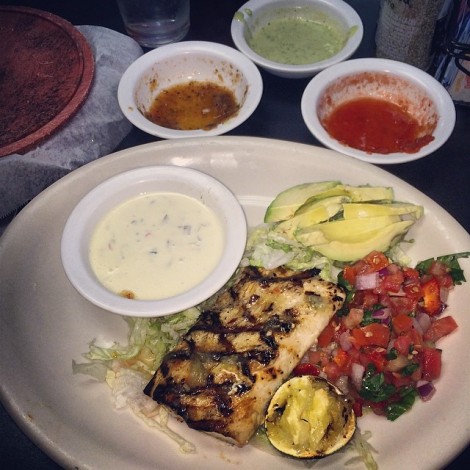 You can also tweet the company and see what they say.  I was in the middle of a titter-conversation with Torchy’s Tacos and when it came out that it was my birthday, they sent me this:

I don’t know what they’re sending me, but I know I didn’t buy it.

I can’t wait to see what I get in the mail this week!  (more on that later)

Anyways, so far I’ve gotten some tacos and some wings.  Upcoming is some ‘za and more tacos and BBQ.  It’s on.

This goes for non-food too, but I didn’t write about that because hey, I’m hungry.

Anyone else use this ploy?  Any good free meals lately?  Any other ideas to get some?

For my Disney Dopey Challenge Hal Higdon Training, the weekend called for runs of 5 miles on Saturday, and 15 on Sunday.  And that’s what I did, for a nice 20 mile weekend total!  The weather didn’t make it easy though.  I got running before sunrise both days, but that didn’t help much.  Saturday was around 80 with about 90% humidity.  Sunday was a little cooler – around 70, but with 90% humidity.  Both days I was a sweaty mess!  In fact, it was commented to me that it looked like I had jumped in the lake.  My clothes (and shoes) are still trying to dry.  After that, I felt I deserved a treat….TACOS! 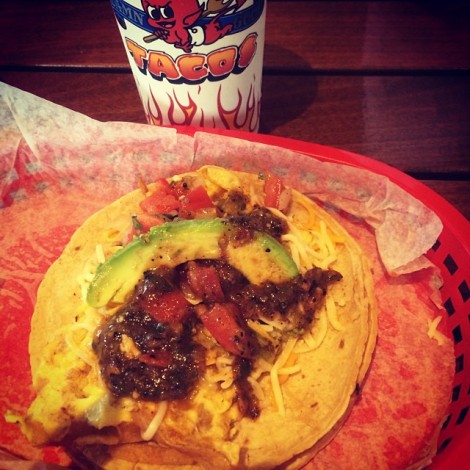 Migas Taco from Torchy’s Tacos. Here’s 1 of about 4 that I ate!

For the Sunday run I met up with some peeps to run around White Rock Lake.  Some of them I knew, some I now know.  You get to know people when you spend a couple hours running together, you know?  And it definitely makes it easier to run these longer distances when you have people to do it with.  That’s one of the reasons I go to WRL to run.  It’s a 9 mile loop with TONS of other runners.  I always enjoy the head nods when you see people who are going the opposite direction as you, especially when you see the same people 2 or 3 times!

We also took a few little batman routes to get us some extra mileage.  I was thrilled when we finished one loop and were at 12 miles instead of 9.  I was thrilled for two reasons.  1) I only had 3 more to go to get to 15.  2) It was my one running friend’s 1st time going that far!  And we did it with a decent pace too!  Somewhere around 8:40 miles.

After the run, I went to a bench that I use to help me stretch.  Under the back side of the bench, kind of hidden, is this small plaque: 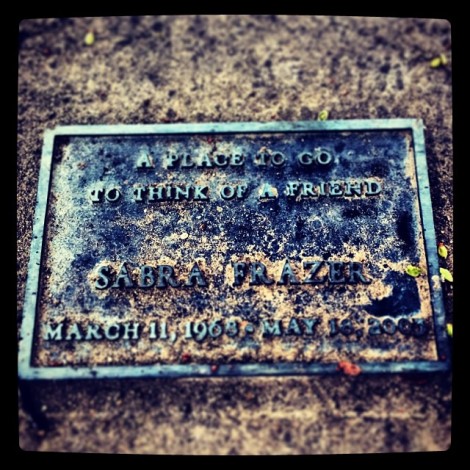 Like I said, I use this bench to help me stretch each time I run there.  And I have seen this plaque before, but this time I really looked at it.  “A place to go to think of a friend”  I wonder what exactly that means?  Is that something this Sabra Frazer said often?  Was this her spot to sit and think of friends?  Or is this where her loved ones come to think about her?

And who is this person?  What happened to her?  It says she died in 2003.  She was only 35.  Curious, I did a Google search.  I can’t find many details…except this:  It appears she ran in races.  Some of her race results popped up on pages like Athlinks.com.  But I can’t find much else about who she was, or what happened to her.  If anyone has any information about her, I’d love to hear it.  Please tell me if you know anything!

The bench that this plaque is under is curious in itself.  Instead of facing the lake, it is facing the trail where all the runners are.  Thousands of people go by this memorial every day.  I doubt not more than a handful have ever noticed it.

I’m guessing like many of us runners in the area, this is where she came to train.  I’m also guessing her family put this here so they can come and sit and watch all the runners and remember how she would run past this same spot so many times.  So I sat on the bench for a little while and did what the plaque says to do.  Yes, it is a very good place to go to think of a friend.