After we finished the Dopey Challenge, it was time to celebrate.  I learned a few years back to book a few days AFTER a destination race to do the sightseeing (not before!).

And props to the boy for putting up with being in Orland for 4 days without visiting a theme park!  Now he was to get his long awaited reward!

He was all smiles by now (and stole my sister’s hat).

Immediately after the final race (26.2), which ended at Epcot, we went ahead into the park.  They have a few fun rides there, though most of em aren’t all that exciting (the boy likes them though).  A lot of people visit for the different countries (some like to drink around the world).  There’s a pub there where we had a celebratory Guinness or two.  Then we ate some tacos in Mexico.  To be honest, after running four races through Epcot, I was ready for a change of scenery.

After four days of running through Epcot, it was time to wave goodbye.

The next day my mom, sis, the boy and I hit up the Magic Kingdom.  It was fun to be there without having to run through it like we had in the previous days! 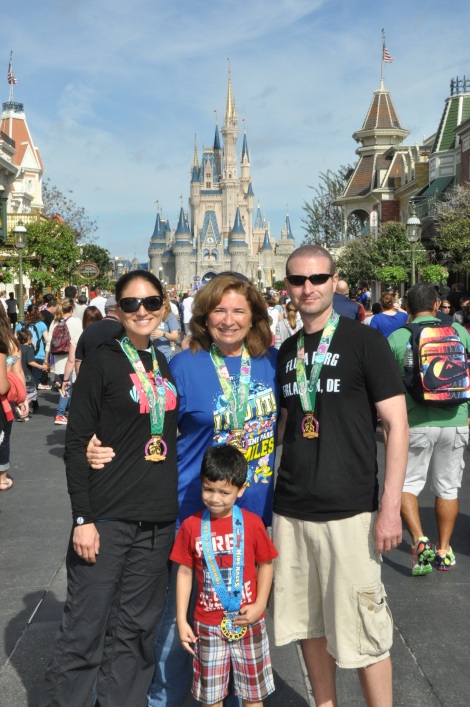 We chose an unique location for a photo. OK, everyone who visits takes the same snapshot.

Yes, we wore our Dopey medals – When else would we get a chance?  It’s also a great conversation starter with other runners, and non runners alike.  The amount of “Congrats!” we got was unbelievable…especially from the “cast members” (Disney employees). 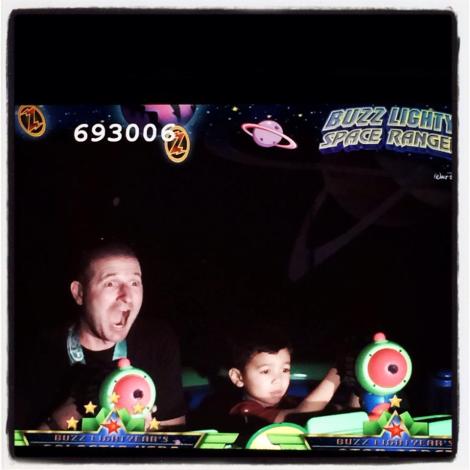 On the Buzz Lightyear ride with the boy. It was very exciting (it’s always good to know where the cameras are).

I’ve always loved the Magic Kingdom.  I’m constantly amazed by their attention to detail and cleanliness.  And this visit, we got a rare treat.  They are redesigning Fantasyland and as part of that the Beauty and the Beast portion has a new castle restaurant.  It’s a 6 month wait for reservations, but we were able to snag one that day!  LUCKY!

Just a couple o’ sad gargoyles outside the castle entrance.

And while you can have an adult bevie at other Disney parks, never ever could you at Magic Kingdom (unless you sneak it in, I suppose, like a teenager injecting vodka into oranges, and then eating the oranges in the park).  But now at dinner service only, you can order a drinky poo.  My sis and I had some wine. 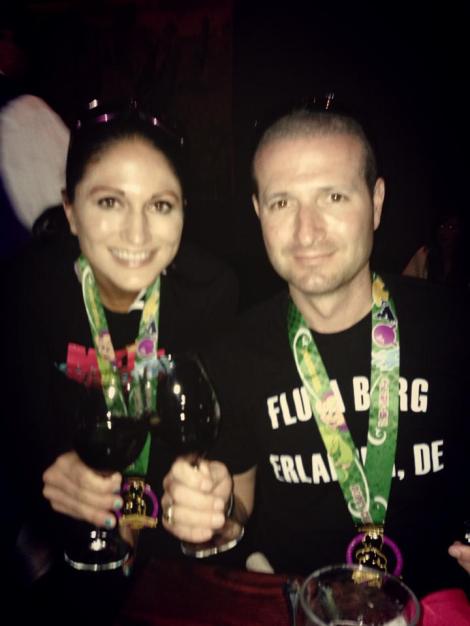 And remember the attention to detail I mentioned…even the napkins were folded like the Beast’s enchanted rose. 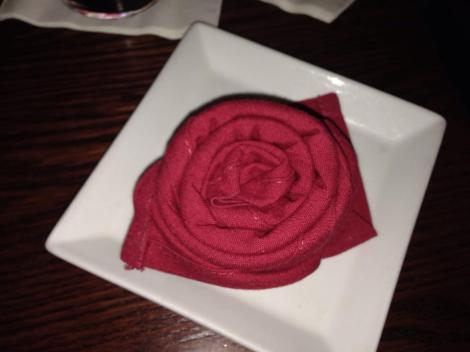 We had until the last petal fell off to find true love. Or until we finished eating at least.

We went ahead and made this our celebratory meal.  Though I didn’t pig out on fatty food like we’re supposed to post big races.  They had some wild Scottish salmon that I had to get.

I know I kind of ruined the presentation when I added the broccoli (that the boy didn’t want to eat).

I also actually had a desert.  I never have dessert.  No real sweet tooth in my mouth. 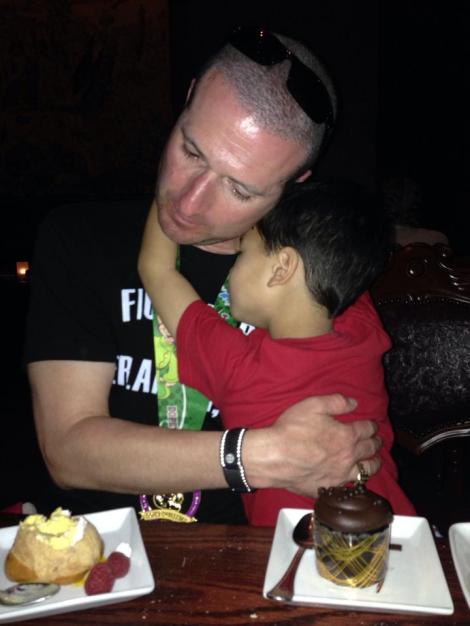 After we ate, we had an audience with the host of our meal. 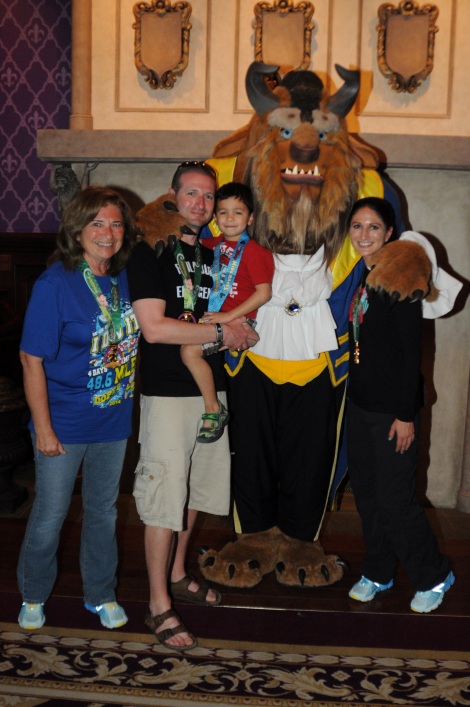 He was very gracious and has the most stunning blue eyes.

We spent the rest of the day riding rides (of course I had to go on Pirates of the Caribbean)!

Capt. Grif didn’t like the flash on my phone.

It was another great visit to Magic Kingdom! 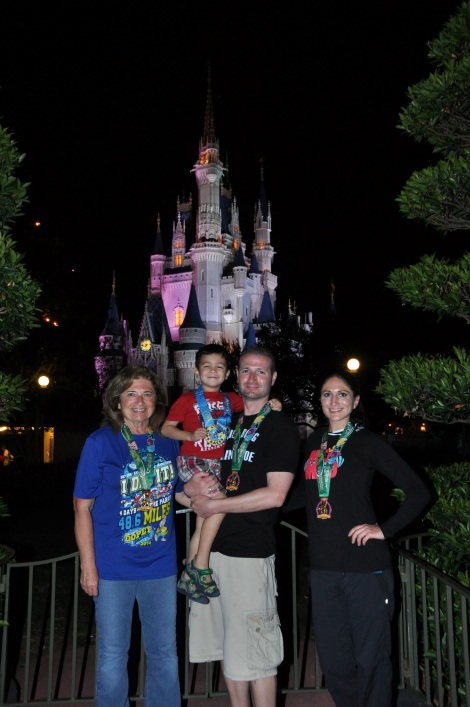 The same castle as earlier, but at night.

The next day we hit up Universal Studios.  I love their theme parks!!!  No, they aren’t as clean, classy, and family oriented as Disney, but they have some really extreme and fun rides!  This time around we hit up the new Simpsons Springfield. 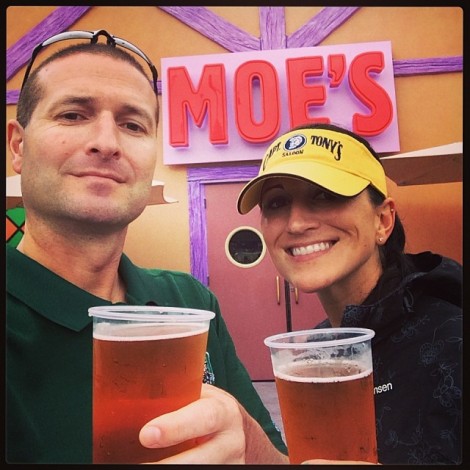 We got a Duff beer at Moe’s Tavern! 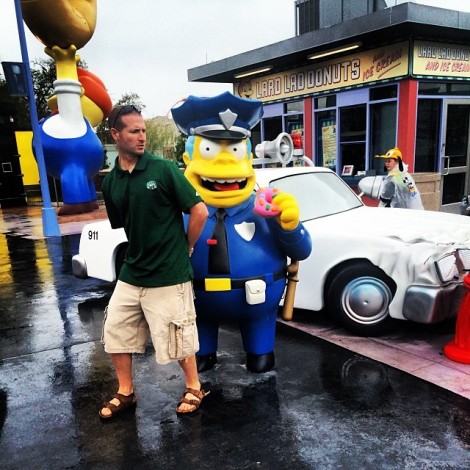 But then I had a misunderstanding with the chief.

One of the coolest new rides was the Transformers one.  And outside they had Bumblebee.  This was an actual moving character, not a statue….

I guess that’s my “Transformers” pose.

And of course we had to stop by Jimmy Buffett’s Margaritaville.  I am a huuuge Parrothead, so this is always a must!

Booze in the blender…

The next day, we hit up one more park – Disney’s Hollywood Studios (formerly MGM).  Again, it was fun to be there leisurely and not all sweaty like when we ran though it for the marathon.

The highlight here was for the boy.  He had been waiting a year to be chosen to fight Darth Vader at the Star Wars part of the park.  This year he made it in got some light saber training from his Jedi master.

Then he got to fight the dark lord himself!

Attack the dark side!

Look out for that tree!

And we were able to meet up with the mouse himself, Mickey!

He hadn’t had time to change out of his robe yet.

And thus concluded our Disney adventure.  I must say we had a lot of fun and I tip my hat to them!

See what I did there?

So there it is!

How bout you?  Do you plan vacations around races?  Do you sight see before or after?  What’s your fave Orlando attraction?