First off, big ups to all my blogging friends who have contributed to my Chicago Marathon Charity Fundraising Campaign.

You guys truly rock my wheelhouse! I promise to get you your personalized thank you pictures/videos soon!  Maybe they’ll even look like this… 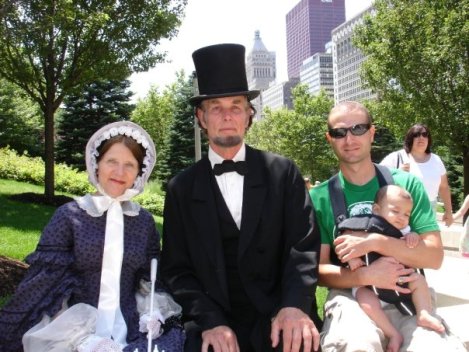 On my last visit to Chi-town. Hangin with the Lincolns and a baby.

You guys have really helped me get closer to my goal digit!

I’m super pumped about the Chicago Marathon. It’s really helped inspire my runs this week. Starting with a 12 miler with WRRC.

After the run. Chillin outside La Rei.

The next day I did some hill repeats on my run. Why not?

And of course, I have to follow it up with yoga to help keep me centered and strong. 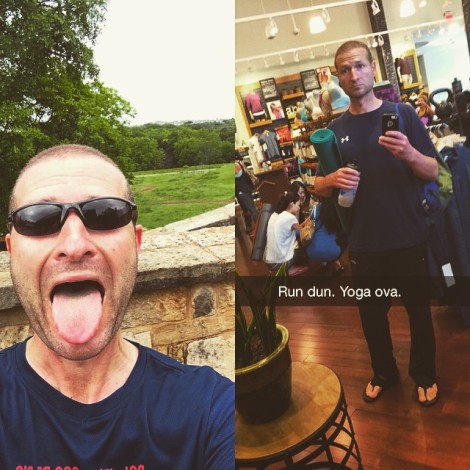 I can’t spell gud, butt at least I finally kept my tongue in my mouth. Yeah, it’s Snapchat – add me: piratebobcat

What else is inspiring this week – oh yeah, watching the Boston Marathon! I especially loved tracking all my friends who were there. Y’all did some amazing times! Including my man Logan, who rocked a 2:31! Yes, that’s a full 26.2 in 2:31!

Logan at the finish via webcam. I will run this race one day. I will.

So there it is. Rockin and rollin! Keepin on and remaining calm. Bring it on, brah!

How bout you? Watch Boston…or were you there? What’s inspiring you? Any suggestions for the personalized pics for those bloggers?

PS. If you’d like to donate to my fundraising campaign, you can do so HERE. Or watch a short video I made telling you why HERE.

The Running Dead & The Armadillo Alive

Since I’ve upped my game a few weeks back to running 6 days a week, I’m a little more tired. Funny how that works. Add to that the Texas heat, which forces me to wake up before the sun has a chance to be fully erect in the sky.

That early I’m usually half asleep when I start my runs. So I kind of feel like a zombie – The Running Dead.

From a recent Halloween. I’m a zom-bee, get it?

Also, I gotta say, our town is pretty much overrun by bunny rabbits. On any given run, I’ll probably pass by 30+ of the little carrot eaters. No different this morning…But this time they brought a friend.

As I rounded a corner I could see a couple rabbits up ahead next to the path I was on. But one of them was bigger. As I got closer, I could tell it wasn’t a hare, but it was too dark to make out exactly what it was. I hoped it wasn’t a small bobcat.

Stolen from a friend. These cool cats are around here too.

To be safe, I made some loud grunting noises and clapped my hands. Normally that scares them off (and gets me sidways glances from neighbors). But this animal was giving zero F’s. It paid me no mind (too bad cause zombies eat brains).

Fearing it might be a rabid raccoon (yes, we have those here this summer – and yes, they go up to humans when rabid), I moved off the path. But then I saw what it was – an Armadillo! He/she was digging for grubs to eat.

I still kept my distance because they have sharp claws, but it was cool to see one alive. Usually when I see one, it’s roadkill. I also didn’t get too close cause she/he wasn’t as fun loving as the ones I see in local bars.

Yes, they sell these in stores here.

This wasn’t as cool as the time I saw a real unicorn on a run, but it was still kewl (my street lingo is totally hip).

How bout you? Seen any different animals recently? Are you a morning person? Would you party with an armadillo?

Unlike most people, I like to run in scenic places.  Problem is that I live in a suburb of a city and it’s not very scenic.  So I try to run in parks whenever possible.  Occasionally I’ll run at Arbor Hills Nature Preserve.  I like it there as there are both paved and non paved trails.  They wind all over and there are endless possibilities for routes.  Also, there are usually lots of other folks out there being active too.  Only thing is that it’s a nature preserve, so there are wild animals out there.  I have no problem with that, but I will tell you one thing – it keeps you on your toes.

There have been several times I’ve been out there running where I’ve had to jump over a snake on the trail.  That’s freaky, but that adrenaline keeps you running, I tell you!  After you jump over a snake, every single stick and root on the ground looks like another snake in my mind!

A couple of times I’ve been there either early in the morning or in the early evening when it’s dark out.  There are no lights on the trails, and if there’s no moon out, it can be hard to see what’s around you.  But what is freaky deaky is that you can hear animals scurrying about.  Chances are most of them are rabbits, but there could be bobcats, coyotes, snakes, or even mountain lions (I’ve been told).

I tell you this because in each of those experiences, I definitely picked up my pace.  I read a Matthew McConaughey story one time where he recommended running in perceived dangerous locations to keep your adrenaline pumping and your feet moving.  Let me tell you, it works.

This is all on my mind because last night I was running through a park near my house and I came upon a wild bobcat.  The sun was setting and it was getting dark.  I was on a paved trail that went through a wooded area.  I saw a few rabbits take of frightened into the woods as I startled them.  That was jumpy enough for me as I didn’t see them until I was right on top of them.  But then, I turned a corner and apparently startled a bobcat that was on the trail right in front of me.  It shot off into the woods.  But I could see it’s glowing eyes looking at me from the woods.  I didn’t know what to do, so I stopped.  I decided not to continue on that path as the bobcat could be up ahead.  Luckily there was another path to my right, and I took it.  The rest of the run though, I was looking over my shoulder to see if it was behind me.  I know that I scared it more than it scared me, but still.

Don’t get me wrong, it was cool seeing one in the wild, but freaky.  And I definitely picked up my pace a bit to get out of the wooded area as soon as I could.  I also made it a point to make loud noises the rest of that portion of my run, hoping that it would warn them I was coming and hopefully they’d be gone before I got there, if that makes sense.

So there you go, if you want to run faster than you are, just put yourself in a scary situation.  Most of the fear is going to be all in your head, anyway.  I’ve actually heard of an app that puts zombie grunts, footsteps, etc. in your ipod when you’re running.  They noises gradually get louder and more frequent until you’re at a sprint, then it calms down and starts over again.

Something to think on.