Posted on November 7, 2014 by piratebobcat

So I had a pretty good October, running wise. I ended up going the most miles in a month since when I was training for this past year’s Disney Dopey Challenge.

My last run of the month was with friends. Here’s what we looked like after…

I ended up running about 145 miles. Not bad, especially considering that I’m not training for any particular race.

I know it says 142, but I did get in some miles that weren’t recorded by my watch.

Buuut, when it came to the last day of Runtober, I didn’t run. Why not? Because my knee felt weird, fool!

I’m convinced that it was my body telling me to get some rest. I didn’t take one day off…even after setting a nearly 5 minute PR in a half marathon in October. Mistake. And so my body was telling me to take a break.

I ended up taking three days off. And since then it feels much better. And I’ve jumped back into running 6 days a week.

My body did the same thing to me back in the winter. After the Dopey Challenge, I didn’t take enough time to let my body recover. And when I was out on a run, I tripped and Nancy Kerriganed my own knee. Forcing me to take a month off. 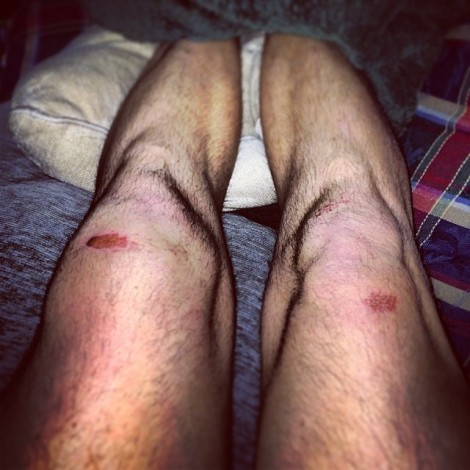 And now for something completely different…

Here in Dallas, the city is gearing up for the football Cowboys playing their game in London, UK this weekend. And the talk radio station I listen too has been broadcasting live from Jolly Ole’ England. They are going on and on about all the cool experiences they are having. I’ve been to London a few times, but it’s been several years. And all this talk is really making me miss it.

Ahh well, the best I can do now is find a British Pub and watch English Premiere League on the telly. Might have to do that this weekend.

How bout you? Have a good Runtober? Are you a body whisperer or a fool? Ever been to London town?

Posted on November 1, 2013 by piratebobcat

As I get closer to the Disney Dopey Challenge (4 straight days of races: 5k, 10k, 13.1, 26.2), my training mileage is obviously increasing week by week and month by month.  I decided to look back at the past few months and see what I’ve been hitting.  It goes a little something like this:

Looks like the Hal Higdon plan I’m following increases about 20 miles per month.  I don’t want to look ahead and do the math to see if that will hold true, I’m just going to keep following it and trust that it will all work out.

That said, I think 130 miles in a month is a pretty good number.  I’m happy to have reached that.  But I know enough not to get all cocky about it.  Here’s why:  I have friends who do 100 mile races in a DAY.  I have friends who run up to 120 in a WEEK.  And the list goes on.  So there is always someone doing more, and there are always opportunities to do more.  I also have friends who run just a handful of miles a month, it’s all good as long as they’re out there!

Anyway, on to November and many more miles!

As for All Hallows Eve, it went well. The girl wanted to be a cowgirl (we’re assuming this since she can’t really talk, but she is obsessed with her pink cowgirl boots).

My boy wanted to be a ninja.  I’m guessing he wanted to be that because he has two imaginary friends who protect our house from a tree in the front yard.  They are named Go and Johnny Go.  They are ninjas.  famous illustrator David Hyde Costello, who graciously offered to sketch them for him.  Here’s what he drew:

Grif said the only inaccurate part is that one of them has a bow and arrow, not a sword. Shoulda known!

I must go back and say that I can only ASSUME they are imaginary friends, because as my one friend pointed out, if they’re true ninjas, then they cannot be seen!  Here’s Griffin in his costume:

Do not cross him unless you want to taste steel (or plastic, as it were).

And it just so happens that I have access to a ninja outfit as well.  So I told him I’d dress up with him, but I don’t do normal costumes, it has to have a twist.  I decided on adding a red wig and going as a Ginja (ginger ninja).

I’m a ginja with attitude.

So there you have it, another month of run training down, and another successful Halloween!

What about you?  How’s your mileage looking?  What’s you dress up as for Halloween?  Do you have any imaginary friends?