The latest TNSR Beer Mile came and went. And I’m happy to report it went much better than my previous attempt.

Everyone is all smiles before the race…that would change.

I wouldn’t set a PR this day, but I still had a decent time, and I didn’t blow chunks – that’s always a win in the Beer Mile. Not everyone there could say the same thing. A few people in the pictures in this blog vomited. I won’t say who, but maybe you can take guesses.

At least one smiley clean shaven person in this pic puked.

If you’ve never done the Beer Mile, what happens is you pound a beer, sprint a quarter mile – then repeat until you drink 4 beers and run one mile total.

We were so official this year – bibs, timers, and we were provided with Mich Ultra beers.

What makes it tough is all the carbonation bubbling up in your belly. Well, that and 48 ounces of liquid sloshing around as you try to sprint 400’s. If you can’t get some burps out, then you’re in trouble. I’m happy to report that I burped each lap!!! 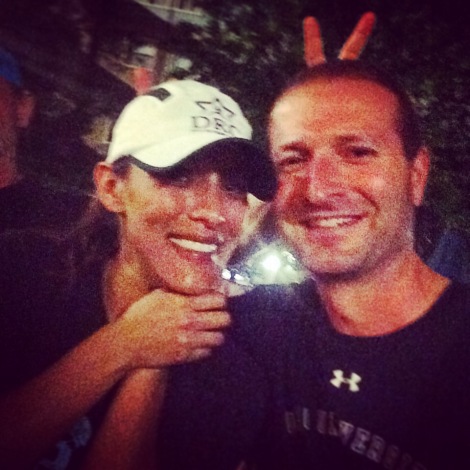 Someone in this pic may or may not have puked.

And even though I didn’t PR, I did come in 4th place overall – just missing out on the podium.

Looking back, I think a couple things helped me out this year – Like I said, I worked really hard to make sure I burped. But also, I chose to drink warm beers instead of cold – tasted nasty, but had less carbonation. <taps head> “Not just a hat rack.”

Thanks for another great event, TNSR!

And after the race they had food grillin, music blastin & fun havin. I even made a 6 second video about it…

All in all a good time was had by all – even the folks who hurled.

Kanye was upset at his race results…or maybe because he puked.

Luckily these Beer Mile races don’t happen too often – they really do hurt. But I did have a great time and look forward to the next one!

How bout you? Would you ever want to do a Beer Mile? Have you ever? Any guesses as to the pukers?

So some more good news to go with the nearly 5 minute PR in a Half Marathon that I ran over the weekend…today they gave us our race photos…FOR FREE! That is rare and most welcome!

Look, a decent race photo! Feet in the air and all. Shirt looks like it needs ironing. 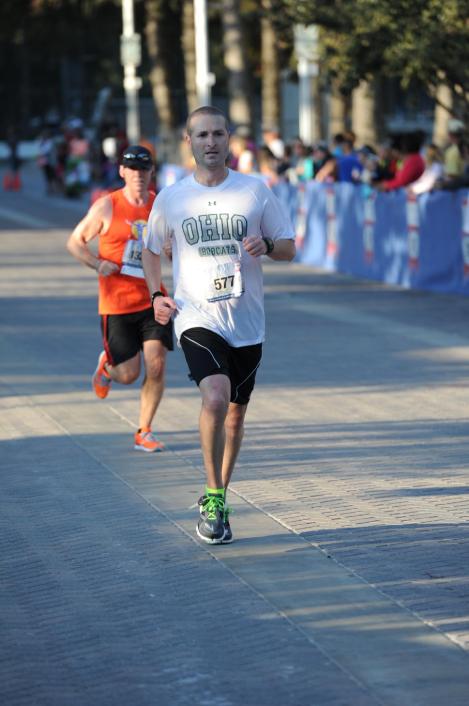 Not as good, but hey, it’s free. At least my shirt is less wrinkly.

OK, this one is awkward. I think I tried to smile, but only half my mouth agreed to do so – either that or I had a mild stroke.

And get this, they also had a short video of me finishing. You can watch it HERE.

Anyway, after the race, I didn’t have much time to celebrate because I had to get to the airport for a flight to Houston. Took a quick video flying over Dallas…

I was off to H-Town for the Emmy Awards Gala. This year we were nominated for two.

Here’s looking at you, kid. Hey wait, how did a baby goat get in here?

Anyway, we didn’t win any this year. But that’s more motivation to step up our game! We’ll be back next year!

The next morning I was tired and sore from the previous day. But I looked out the hotel window and saw the Houston Half Marathon going on. Despite the 93% humidity, I decided to lace up my runnin’ shoes and go run along the course for a bit to shake out my legs and to support the racers. I always love running in new places. 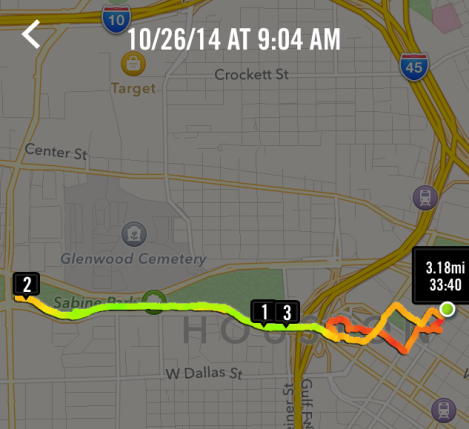 I actually went 4 miles, but my GPS had issues amongst the skyscrapers.

What a crazy few days. Such a whrilwind. But would we want it any other way?

How bout you? How would you describe your race photos? Run an any new cities recently? Tell me something!

Well it looks like all the extra mileage I’ve been running is paying off. I set a new 5k PR at Oktoberfest, ran within one second of that PR at last week’s Mavs 5k, and then two days later PR’d by nearly 5 minutes in the Michelob Ultra Dallas 13.1 Marathon.

My goals going into this race were: 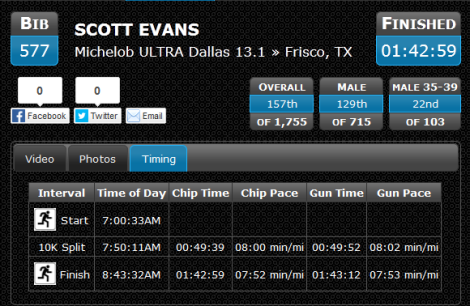 The weather was warm – 70 at the start, and fairly humid, and a bit windy. Also they changed the course this year ~ unnicely adding in some rolling hills the first half of the course. There was also a nasty little zig zag of a couple 180 degree turns at on little section. They also feature an unwelcome hill at mile 12.

There was also very little crowd support and entertainment along the course. But overall, it’s still a good course and race. Like I said, I PR’d, and so did several of my friends.

Some of my PR friends. We did it big..until that guy stole our water bottle.

I took it out easy and slowly increased speed as I went. Once we got to the Katy Trail section of the course, I could see the 1:45 pacer off in the distance. I ended up catching him around mile 10 and was able to pass him by a good distance. At the water stops I would look over my shoulder to make sure I was keeping my lead on him.

The White Rock Running Co-op and Thursday Night Social Run folks. Everyone had a great outing!

Unfortunately I dropped my Gu packet around mile 10, so I had to rely on the Gatorade at the water stations. I walked through three of them, but I didn’t lose too much time doing so, luckily.

My buddy Terrance ran his first half marathon! I’m on my tippy toes.

When I got to the last turn, I only saw two people in front of me, and I kicked it in, using them as goals to pass…I did! I even heard a shout out from the race announcer.

I also had two friends in this race who finished 2nd and 1st overall!!! Speedy dudes!

Brent and Logan collecting their hardware.

After the race they had a fun band playing, but I felt bad for them because it was so hot out that everyone was hiding in the shaded areas. Well, except for one hula hooper…

Besides the bazillion friends I had running this race, I also had a gagillion more who were there to cheer. Great people. 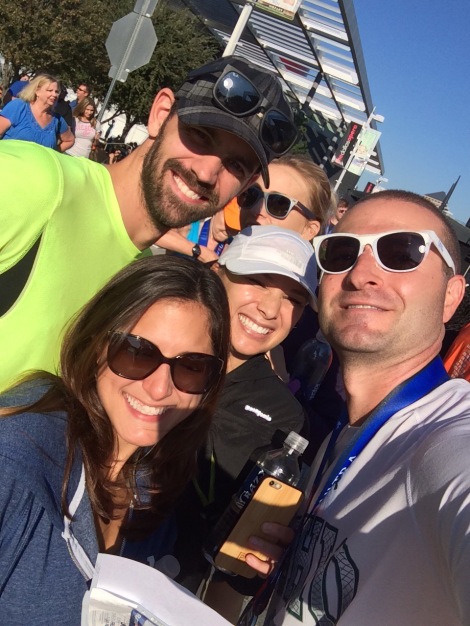 In the end, this race is known for PR’s. Despite the changes this year, that reputation held true. It was a fun event with lots of fun friends! 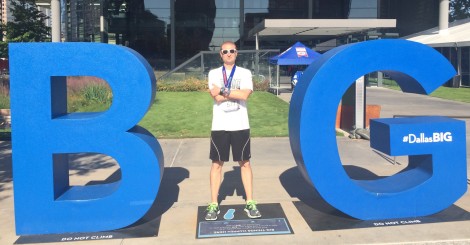 How bout you? Know any races where people usually PR? Did you know hula hoopers love Bobby Brown music? Anyone else race this weekend? Or do two races???

It was time to get in one last weekend of miles in before my next half marathon.

So Friday I knocked out a quick 4 miler – pretty uneventful.

Saturday I banged out 14 miles. This run I met up with the White Rock Running Co-op, and a long time run bud… 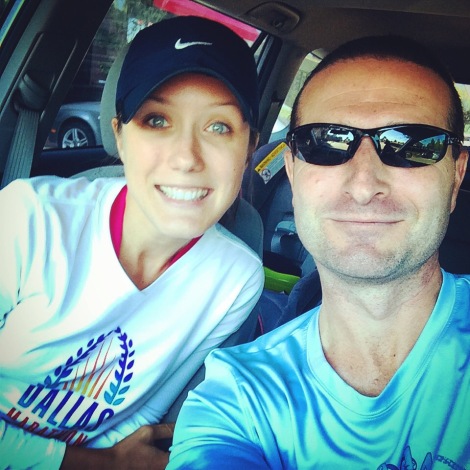 My friend Ann. We ran. I ran with Ann.

My bud and I hadn’t run together in a while, and so we chatted the (exactly) 2 hours we were running. I was pretty pleased, because even with the chatting we still were able to hold an 8:30 per mile pace. I’m hoping that’s a good sign for this weekend’s race where I really want to claim a PR.

It was also good that I ran there because part of the race is going through the same part of town as this training run.

How can it be butt burnin if it’s only medium heat?

Then it was on to the boy’s soccer game. Sadly, my coaching didn’t lead us to a win this week. 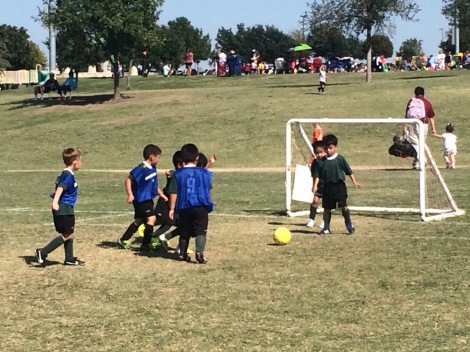 On Sunday I met up with some friends for a trail run. We cranked out another 6 miles.

We forgot to take a pic, so here’s an old one of mostly the same folks.

We were either on a squiggly trail, or drunk..or both.

Afterwards it was on to yoga. Aaaaand my legs were done.

The rest of the weekend saw us visiting the pumpkin patch. Though it didn’t seem quite right when it is 85 degrees out.

This event combines a lot of stuff I love – running, the Mavericks, and The Old 97’s. I’ll preview this race soon, but for now, just know that I’m super happy fun time pumped!

How bout you? Exhausting weekend much? Any good topics to talk about on long runs with friends? Git yo pumkins yet? Good idea to race less than 48 hrs before another race?

So I’ve got a secret. I’ve been keeping it close to my vest (side note, I also started wearing vests). Here it is: I’ve been secretly training for a race.

I hadn’t registered for said race until just this week, but I’ve been eyeballing it from a distance. It’s the Dallas 13.1 half marathon. I ran this race two years ago and set a PR.

In all black like a villain robbing time and bling!

This race has the best half marathon course of any race I’ve done in Dallas. And since I did well last time, and since the weather will hopefully be cool, and since I have a ton of friends running it, and since I’m healthy and in decent shape, those are the reasons I chose this race.

This year’s bottle opener medals. Funny cause Mich Ultra is a twist off.

It used to be sponsored by Allstate, but now it’s presented by Mich Ultra. To be honest, I’m no fan of Mich Ultra. I personally want a beer with some flava. Like a proper Guinness. Maybe I can cover up the gigantor Mich Ultra logo on my medal with a Guinness one…

My other issue with this race is that it is officially called the “Michelob ULTRA Dallas 13.1 Marathon”. Catchy title, eh? My issue is that they call this half marathon a ‘marathon’. What the wha? I have zero clues as to why they are calling a half marathon a marathon. Not cool. Not to mention the fact that ULTRA is in the title, implying that it’s an ultra marathon.

Anyways, back to my secret training…It’s been all about them miles.

I haven’t been following any specific plan. My main goal was simply to increase my weekly mileage. I’ve also been doing some speed and hill work, but mainly I’m all about the miles this time around. If you read my weekend recap then you know I put in 25ish miles – much further than the 13.1 I’ll be racing. I hope this strategy helps.

They say you hit the wall at the point of your previous long run. So I hope that by running 15-16 mile long runs will delay the wall in a 13.1 mile race. Fingers crossed!

How bout you? You have any secrets to share? Are you also offended that they’re calling this 13.1 race a ‘marathon’. Do you train by running further than the race distance?