So the trip got off to a rocky road start. As in my ride to the airport arrived at 5 a.m. (thanks for the ride dad!) and as I was walking out the door, I realized I didn’t have my wallet. It was nowhere to be found. It was frustrating. It was stressful. It caused me and my friend to miss our flight. I felt awful about that. And any hope to getting to the Expo early was dashed.

Too many people. Too much stimulation. Please don’t make me go in there.

Luckily I’m one of the few Americans who actually has a passport. I grabbed it. My pops let me borrow his credit card. I thanked him. Finally got to the airport and sweated out the standby process.

Three happy people. One miserable one.

Luckily there was a loooooong security line that caused many a people to miss their flights. Thanks TSA. But their loss, my gain. I took one of those poor suckers seats on the next flight. Standby success!

First sight off the L train. A sign that we were in the right spot.

Then it was off to the Expo. Luckily there was a shuttle from our hotel. And by shuttle, I mean a real live school bus. Okie dokie.

I personally don’t like expos much. Too overwhelming for me. But I sucked it up and tried to enjoy it. Luckily they had free beer to help endure it.

We found the beer bus!

Do we really have to run that far? 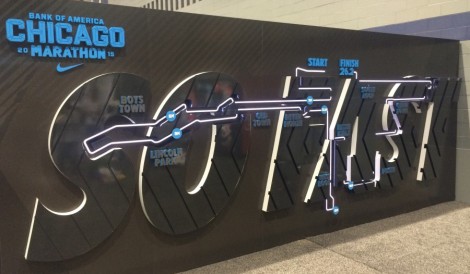 You see that Chicago? I own you!

With the expo out of the way, we were free to do a bit of light sight seeing.

Who us? No, we’re not tourists.

Heck of a town.

I see you, camera person. 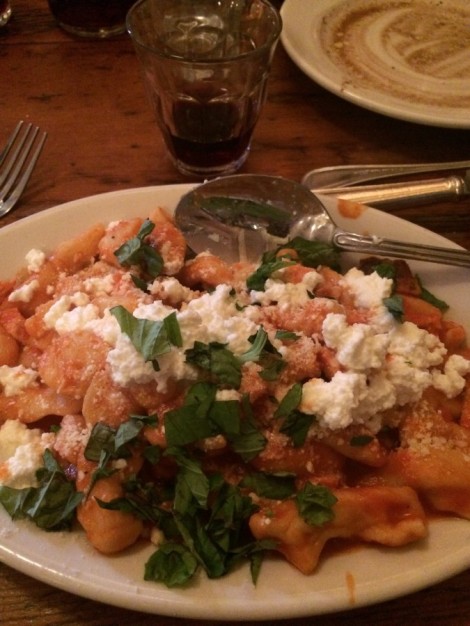 And did I mention I was running this race for charity? I had raised funds for Alzheimers, and the group was cool enough give us a pre race dinner! They rule!

And it was all purple.

But the best part of the pre race shenanigans was meeting up with my old college buddy, Rexy. We were on the cheerleading team at Ohio University and have remained close ever since. She’s the bomb biggie…and one heck of a runner. We met up with her for a two+ mile shakeout run the day before the race.

Lisa Lisa, why ya buggin?

Where did we run? To the Bean of course! And we weren’t the only ones with that idea. I think every other shakeout runner was there too.

Have you ever ‘bean’ to Chicago?

That’s always a good spot for pictures, and I’m glad we got it out of the way early as it would be packed later on in the weekend.

And since I refuse to take a #flatrunner picture the night before a race…all that was left was to wait for the 3 a.m. alarm to go off. While I did, I went back and read all the supportive comments you bloggers have been making on my posts the past few weeks (I still promise to respond to each of them). I also checked out all the supportive messages on the Facebook as well as the kind texts I received. Thanks again urrbody!

Time to sleep. Months and months of preparation was over. In the morning we race 26.2 miles across CHI.

One heck of a town.

Come Monday I will post my recap of the race. Stay tuned folks! Spoiler alert – I ran a PR!!!!

How bout you? What’s your pre-race ritual? Do you like expos? Ever bean to Chicago?

Just like how I Like running, I also like to cook.  Nutrition is KEY for weight management and keeping me on my feet for all those miles!  I’ve never had a class, but I think I’m decent in the kitchen.  In fact, I was once told by a guy who said he could communicate with my “spirit guides” and that one of them is a lady originally from France who helps me cook.  So take from that what you will!  Anyway, when I cook, I like to be healthy.  It’s always a challenge since pretty much everything in the grocery is the devil in disguise.  But here’s what’s been fueling my workouts this week.

I don’t know measurements as I don’t like to measure.  But basically I made one cup (pre-cooked) organic quinoa.  Instead of water, I used low sodium chicken broth.  I also defrosted some frozen organic veggies (broccoli, cauliflower, carrots, zucchini) on the stove and threw them in the now cooked quinoa.

The veggie quinoa was supposed to be the side dish to my wild-caught salmon.  I had a pound of the fish.  On each side I put Himalayan sea salt and fresh cracked pepper.  I seared it on the stove in organic virgin Coconut Oil.  Things were going well, until I accidentally flaked the salmon apart.  No worries though – decided to just throw it in with the veggies and quinoa and mix it all up.

Lots of omega-3’s, nutrients, and other health benefits to this meal and it made enough that it provided plenty of meals for me and others.  This was good hot, and cold as leftovers (Personally, I like to add Tabasco sauce to it too!).  It’s been fueling my runs and weight sessions for a few days now.  Today I did a quick three miles on the road and then an hour of weights.  Felt pretty good.

Looking back, I think I should’ve thrown in some pomegranate seeds, that would’ve added another layer to not only the flavor and texture, but also the healthiness!

So there you go, an insight into what’s been keeping me moving this week.  Sounds good or yucky?