I like the recent trend I’ve been seeing here and there of races giving you the photos for free! I’m sure it’s included somehow in the registration fee, but it’s much better than them asking for $30 a photo.

If you read my Hot Chocolate 15k Recap, then you know I ran the race, duh. But after I wrote it, they sent me the race photos they said they took of me. Here they are:

Before the race with run buds Julie and Mike! 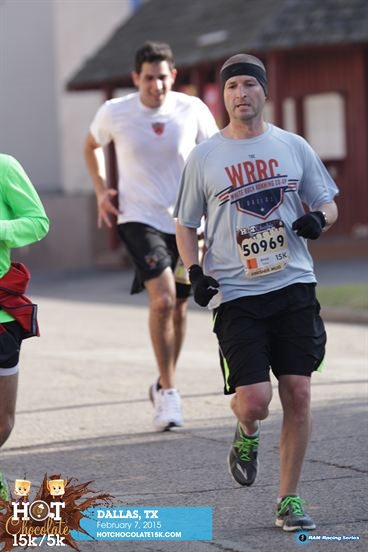 During the race. Looks like I was feelin it.

Apparently I had time for a wardrobe change and facelift during the race. 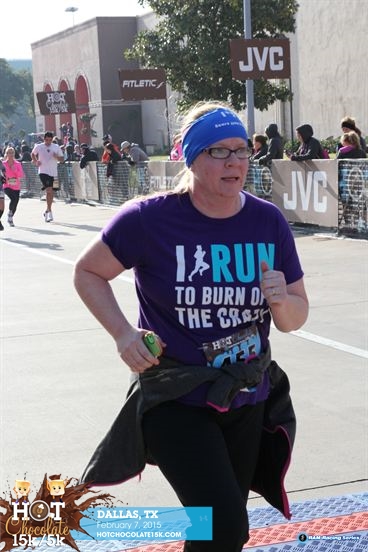 Oh look, there I am next to my yellow shirted clone. 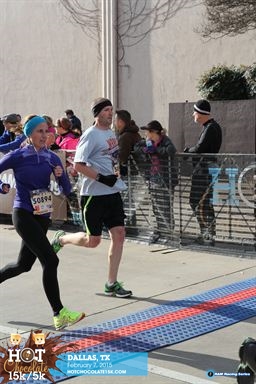 Finally, at the finish line!

When you think about it, it’s just smart to give out the photos. Then the race photogs know that they’re getting paid instead of hoping to sell a few prints. And since they put a bug on the pics, it’s free advertising every time someone posts them to social media, or ahem, blogs using them.

Speaking of which, a photog associated with the Key West Half Marathon later saw my BLOG RACE RECAP and was kind enough to send me a photo he took of me! So cool!

This is like the 4th time in the past few months that the races have been sending out free photos. Gotta love it! The others that come to mind are the Dallas 13.1 I PR’d also sent Free Photos, as well as the Abby’s Run 5k where I won my age group! who posted All The Pics! Glad to be able to memorialize those races!

I hope this trend continues!

How bout you? Any free race photos lately? Do you even want your race pics? Ever had gender reassignment surgery?

The Dallas Hot Chocolate 15k was my 2nd ever race at that distance. And I’m glad to report that it went much better than the first one. In fact, I earned my shiny chocolate themed medal by running a new PR!

There was supposed to be sold out with 13,000 total people running the 5k and 15k races. That means a lot of traffic getting to the event. Luckily my friend, Jewely talked me into taking the train down with friends rather than drive.

Of course we needed a pic on the choo choo.

We definitely saved a lot of time and stress by taking riding the rail. All we had to do was sit there and watch the world go by.

You can’t take a selfie around us without getting photobomed, duh!

As we got closer to the race, the train got more and more crowded. We were lucky to have gotten on at an earlier stop, when seats were still available.

Train’s getting full. Luckily they had stripper poles for people to hold on to.

The temps that morning were in the mid-40’s, but with a 10-15 mph wind it felt like 35 degrees!!! So when we got to the event, we stayed warm before the race by staying indoors!

B4 da race. I never understood arm sleeves. Are they for people that don’t care about cold shoulders?

The 5k started first. But due to traffic and such, people were late. The race was nice enough to wait for them, but that also meant the 15k would start like 15 minutes late. It was not fun standing in the cold waiting for the starting horn to blow! But eventually, we were off!

My run buds Clay and Dawn were on the course cheering. Clayton got this shot of me. Dueces!

The course itself was TOUGH – lotsa hills! Most people don’t think of Dallas as hilly, but this race made sure to find as many as they could!

At mile 5ish, we had about a pretty steep incline for about half a mile. At the top of the hill, some spectators had set up a whiskey station to give shots to the runners. Haha, with the pain I was feeling, I was tempted to take one, but decided to plug along instead.

The red parts are my slowest sections, coincidentally, they were also on big hills. Ha, when I saw that hill around mile 8 after turning the corner, I dropped a few choice words aloud!

And can I just say, I love the support of the running community. Towards the end of the race, a few of us strangers started encouraging each other with words of encouragement. It helped us finish strong!

You can watch a short video of my and my new besties crossing the finish line BY CLICKING HERE! 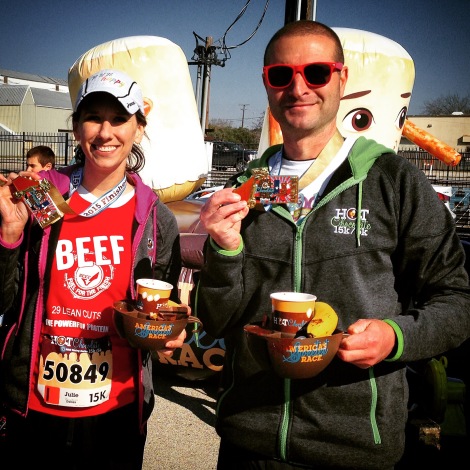 After da race with our sweet rewards.

After the race, they had a fun little after-party going on with a DJ, chocolate treats, etc. Here’s a 6 second video recap I made:

To be honest, I don’t have much of a sweet tooth, so all the chocolate was a bit too much for me to handle. But on the way home I decided there should be some celebrating with a grown-up treat… 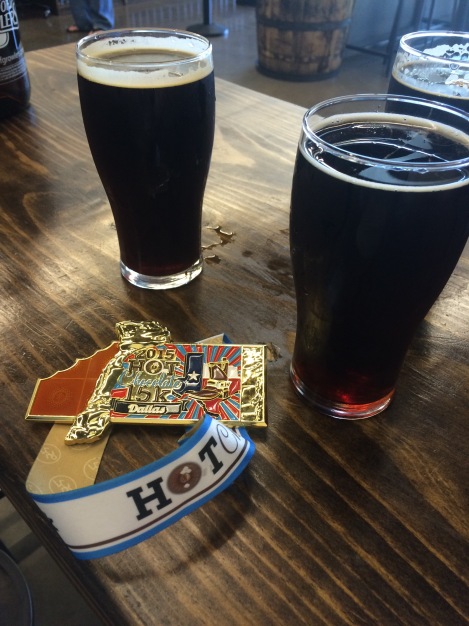 In the end, I was sassified with the results – especially considering the wind, hills, & not knowing how to pace this distance. And most importantly, it was a fun time!

How bout you? LIke that bling? Gotta sweet tooth or a beer tooth? Ever ride a choo choo train?

Posted on February 6, 2015 by piratebobcat

This Saturday is the Hot Chocolate 5k & 15k in Dallas. I’m running the 15k. I’ve never run this race series before, but I hope it will be fun!

Since the race is on a Saturday, they had the expo on Thurs-Fri. Not very convenient since I typically work on those days. Not to mention it was a pretty long drive from the burbs to the expo site. And get this…they charged us for parking. What the frisbee?!?

But, of course I still had some fun with it…

I didn’t realize how big this race is – they say there’s 13,000 runners running! So I went on the first day of the expo to avoid the crowds.

I got my swag bag and bib and then tried to take another silly selfie with an inflatable, but some gal ran up to me and insisted on taking the pic for me. It totally threw me off my goof game… 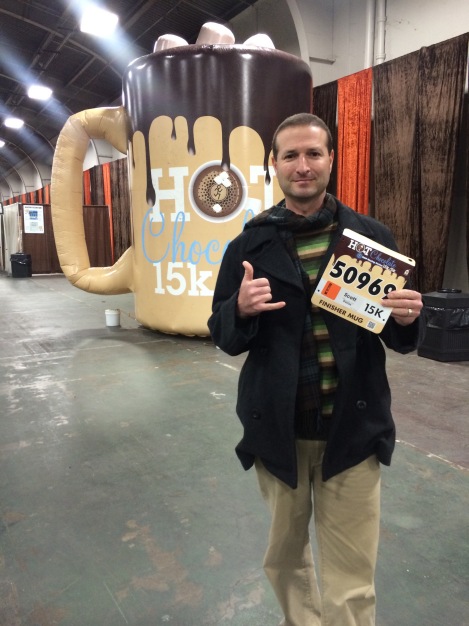 I was too shocked to do anything but give the shaka sign.

For such a big race, the expo itself was pretty small. Maybe 15-20 vendors, I think. But they tried to fun it up with a DJ, bounce houses, and chocolate. I made a quick 6 second video to try and capture the moment.

Anyway, as for the race itself, it starts/ends at Fair Park in Dallas. It’s a historical part of town, home to the Cotton Bowl, concerts, State Fair, performances, festivals and such. It’s not located in the best part of town, but I do enjoy going there. I’ve actually done several races in that area.

After a race in Fair Park with some friends and a giant ferris buehler wheel.

I’ve taken a look at the course and I’m familiar with a few of the sections. One stretch that sticks out to me is Gaston Rd. We ran that same road during the Mich Ultra 13.1 back in October. It stood out because of the long rolling hills. Hopefully it’s gotten flatter since then. Stay the course, my friends.

And while I haven’t run this race before, plenty of friends have. I was glad to get the scoop from them about the driving/parking/traffic nightmare that it is. I guess 13,000 folks can block up the roads. So some friends and I are going to take the train down. Choo Choo Chew Chocolate.

I’m in corral “I”. Usually I’m in corral 1 or 2. But they told me how it works is the 5k is A-H, and they start first. Corral I is actually the first corral for the 15k. Whew, I didn’t want to be doing too much dodging and weaving!

Once the race starts, I’m not really sure how to pace it. I’ve only done one other 15k – like a year and a half ago. All I remember is that I went out too fast, and that it was wicked hot/humid. You can read the recap HERE.

The only pic I took that day. Say ahhhhhh!

Anyway, I look forward to the race! I hope it all goes smoothly and we have some fun! And I can’t wait to get this medal around my neck! 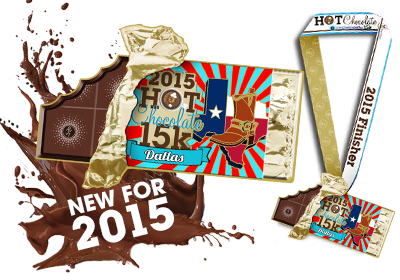 It’s a metal chocolate bar. That’s one way to get iron in your system.

Come back in a few days for the race recap!!!

How bout you? Ever run a Hot Chocolate race? Anyone running this race with me that I should look for? Ever run a 15k before?

New Race, Random Question, & Super Heroes all up in yo grill!

Posted on February 3, 2015 by piratebobcat

Random thought – I wonder if the parents of Miles Davis were runners and that’s why they named him that.

Anyway, it’s been a good couple weeks of running. This past weekend I got in a long run with WRRC. We ran to one Dallas running landmark to another and back (White Rock Lake & Katy Trail).

Kind of a pointy laying down cat.

The next day I ran a solo run around one of the ‘burbs. It went well, except for the one stretch with all the bobcat droppings all over the sidewalk…I was looking over my shoulder the whole way!!! “Good kitty. Nice kitty.”

Kind of a cartoon caveman with an giant head.

Unfortunately I had to miss yoga this weekend, but it was for a good reason…the boy’s birthday present! We took him to see Marvel Live!

A bunch of stunt performers dressed up as super heroes.

Thor and his big hammer.

Despite the loud explosions, the boy had fun. And he was doubly thrilled cause his Godmother sent him a Pirate Ship Kite that’s gonna be like bigger than he is once put together! 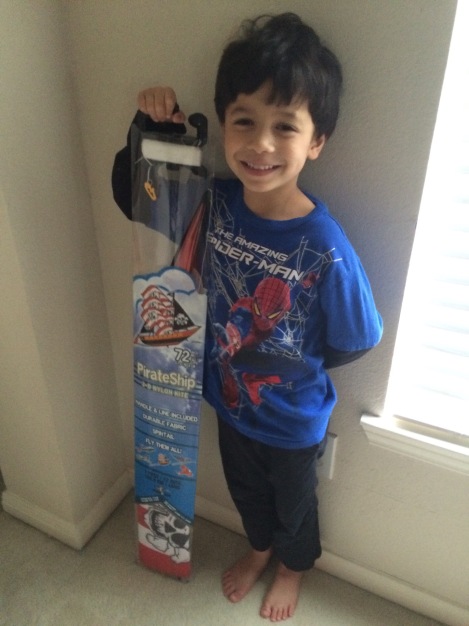 It’s going to be big.

Oh yeah, I forgot to mention that this coming weekend I’m running in a race! It’s the Hot Chocolate 15k in Dallas.

Can’t wait to get this medal!

I think I’ve only raced one other 15k, so I’m not really sure how to pace this distance. But I’ll do what I can. Go big or go home, right? Booyah!

How bout you? Ever run a Hot Chocolate Race? Ever flown a kite bigger than you? Have you ever smashed?