So I did something that might be a little suspect.  It went down a couple months ago I was in North Crackalaka to run The Flying Pirate Half Marathon.  I was at the apt. of my good friend Christie, or Xty as I call her.  She has a gluten allergy and can’t drink beer, so wine it is!  After a couple glasses I get a text from my sis in Florida.  She was getting ready to join us in NC for the race, but had just done something a little suspect.  She had registered for the Dopey Challenge at Disney World.  The Dopey is a brand spankin’ new event.  It takes place during Disney’s Marathon Weekend.  It’s four straight days of racing with each day increasing the distance.  Thurs=5k Fri=10k Sat=1/2 marathon Sun=Full marathon.  She registered because she lives there, wants the challenge, and wants the bling (you get 6 crazy medals for completing the challenge).  Also, after a day and a half of being on sale, the Dopey was already 99% full.  Drats!  I had to make a choice to join her or not then and there.  It was about to sell out, but I wanted time to ponder.  No time to ponder.  Another glass of wine.  Registered!

Let’s get doped up.

Registered.  Now time to train.  But how does one train for this?  I’ve asked several people but they usually tell me I’m on my own with that one.  Some say I should treat it like an Ultra.  The official training guru for Disney is Jeff Galloway, and he does have a plan on their web page.  I will reference it in my training, but I know his method is the run/walk one.  I want to attempt to run each race, to me that’s part of the challenge.

One thing I do know is that our bodies won’t get much recovery time between races.  So what I’ve been doing is trying to make my body sore/tired all the time to get used to it.  I’ve been basically doing two-a-days of running and weights or yoga, back to back long runs, etc.  Last week I was so drained that it was a struggle just to walk the dogs around the block, and when I got on the floor to do my foam rolling, I promptly fell asleep. On the floor.  On my foam roller.

But it’s all good.  I think my body is getting used to the constant (as can be) motion.  Already lost some extra lbs.  Adjusting my diet too to keep up with the extra energy I need.  And I think the lactic acid in my legs are getting flushed out faster so they can be ready to run again sooner.  But in reality, I haven’t started the actual training yet.  The race isn’t until January, which is good.  Gives me time to get ready.  So I’m trying to be smart about it and not do too much too quickly.  Avoiding injury is key!  But I’m wondering how my body is going to respond in a few months when I have to run 10+ miles one day, and then 20+ miles the next.

As far as training programs go, I already mentioned Galloway, which I will reference once in a while.  I’m also looking at Hal Higdon.  I think he advocates back to back medium/long runs.  So that could be useful.  I’ve also looked into the Hanson marathon method.  They never have you run more than 16 miles, but you are running almost every day and going pretty good distances each time.  Something to consider.  I will look at all of it and try to figure out a plan of attack.

I know I’m probably just telling myself what I want to hear, but I’m thinking it won’t be so bad.  I’ve been running these distances for about 5 years now.  And this past year was the first time it all felt like it was starting to click.  I’ve been injury free (mostly) for that time and I keep getting faster.  I recently read that they tell elites coming out of college that it will take them about 3 years before it clicks for them, and it makes sense.  You’d think running is just running, but it’s not. It’s a lifestyle.  You’ve got to learn to put it all together – the diet, sleep, cross training, etc. etc.  It can take a while to get it.  I still have more to learn, but I hope I’m getting it.

Good news is the 5k is not timed.  My goal will be to get a PW (personal worst).  The other races are timed, but I’m hoping to be smart about it.  I do NOT want to PR in the 10k or half marathon.  I want to keep as much in the tank as possible for the full.  It will hurt the ego and competitive spirit to run slow in a race, but it is necessary.  And I know it’s dumb, but I’m secretly hoping I can still PR in the full.  Like I said, I know that may be a dumb wish.  It would be pretty cool to PR though after three straight days of racing.  We’ll see how it goes.

Anyway, I’ve resisted in the past using this blog as a place to post my routine workouts, but I might start doing more of that now.  Hopefully some of you others doing the Dopey can get some use out of my training posts.  And maybe some of you can offer me some advice from your own perspectives.  Runners helping runners.  There you go.

Like I said, it’s Thursday.  That means evening social run.  This week we’re running from one of my fav local pubs (they always have good quality beers and it helps that I know the owners) – Rugby House.  Last week we ran from the Katy Trail Icehouse Outpost in Plano.  GREAT patio!  It’s close to 100 degrees outside in North Texas right about now, but on the patio you wouldn’t know it.  Blanked with tree shade, chilled with cold brews, and fanned by misty fans.  Though on my track workout yesterday, I definitely did know it was close to triple digits….HAWT!

That’s enough for now.  I’ll leave you with a pic from our social run last week.  Join us sometime why don’t you? 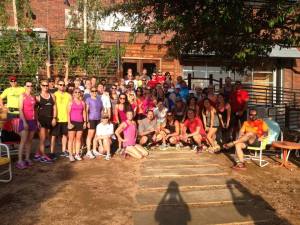 We run. We socialize. It’s cool.