This past weekend was the Chain Reaction 5k. If you read My Preview, you know I had some concerns going in about the course. Welp, my concerns were justified. But I’ll get to that.

First off, let me say that I won the Whole.Stinkin.Race! Like, as in, nobody was in front of me. I was all alone at the finish.

Look at that plaque! I guess I should brush my teeth more. Badumpump.

Yup, that’s right…according to that plaque, I am an overall male. But you probably already knew that.

Anyway, here’s what had happened. My run bud Marsha was also running the race, so she picked me up on the way (not literally, she’s too tiny to hold me up).

Before the race. As you can see by my finger, I correctly predicted my finish. Marsha was one off.

This was a very small race. Around 50 people. I told you it was small.

When the gun sounded I settled in with the lead group – mostly teenagers. After the first lap, it was down to me and one of the teens. I didn’t want it to come down to a sprint at the finish where his youthful energy would work against me, so I made my move when we came to an uphill with 1/2 a mile to go. It worked, he fell behind and I was free to cruise on home! 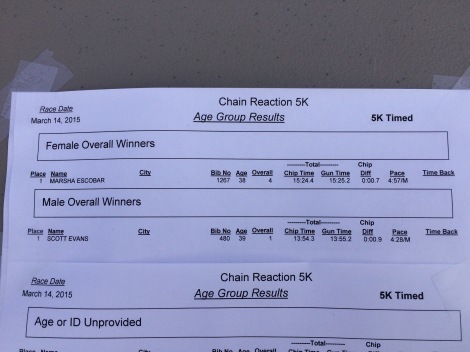 Amazing time, right? I bet you didn’t know I was that fast. Neither did I. But slow your roll, hombre. The course was about A MILE SHORT!!!

So yes, my concerns before the race over the course map were spot on. I spoke with the timing guy and he said the volunteers who marked the course missed a whole section that we were supposed to run.

That said, everyone ran the same distance. So in that aspect, it was a fair race.

Me in high school.

Anykitandkaboodle, at the awards ceremony, they called my name to come get the plaque.

Listening intently as the MC tells me how great I am.

And here’s some more good news…Marsha was also called up as the 1st Female Finisher!!!!! Very cool!!

And the best part, this race gives 100% of the proceeds to a charity that’s a very passionate cause for the race directors. You can read about it HERE. 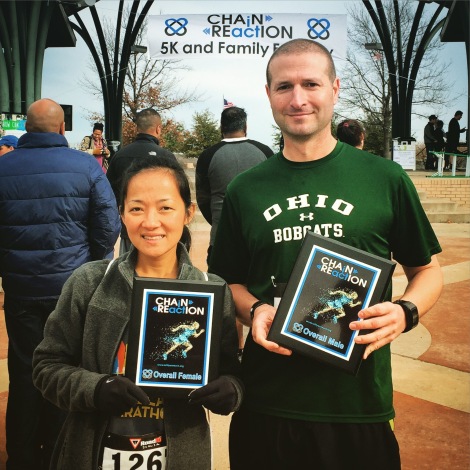 Final picture of the plaques, I promise.

So all in all, it was a successful race. We had a good time and they raised some funds for charity. Booyah!

How bout you? Prefer small or big races? Ever won a race? Do you have a race strategy you deploy against teenagers?