In the words of Inigo Montoya, “Let me ‘splain. No, there is too much. Let me sum up…………with Instagram pics1″

Last week’s runs were ‘zing! We had a little “not 1 million degrees” front come through. It was a JOY to get a break from the humidity.

These fake flowers are BEEutiful.

Buuut then the heat and humidity came back. Ah well, it was nice to have a little break to get some of the confidence back. The oppressive heat has been slowing me down, so it was nice to know I’ve still got it in me – just need cooler temps to unleash the beast!

I do got some aches and pains and tiredness, but can’t complain too much. That would be bogus. Closing in on 400 miles in this training plan, and feelin fine! 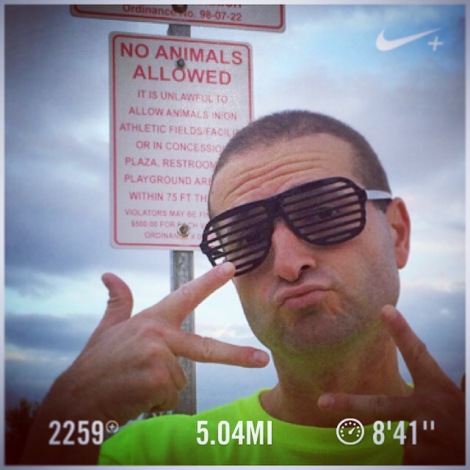 No animals….Not even party ones?!?

In the end, all that matters is that you have fun with it! And I’ve been having a blast with this training! I’ve hit every single planned mile and have got to run with some GREAT people. 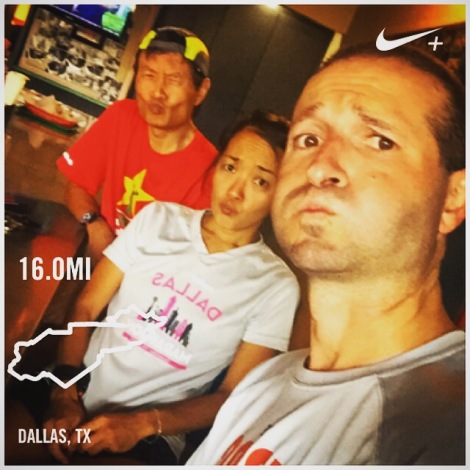 In the words of Crawl, “Puffy cheeks.”

How bout you? Catch my two movie references? Did I miss any caption opportunities? Do you have any questions?

I wrote a little while back about a bet I had going on with a running-blog ‘friend’.  You can chickity check it HERE.

Well, I lost the bet.  His team beat my team in the NBA playoffs.  And of course it went the maximum 7 games, which meant I owed him 7 400’s on the track.  Today I did that to pay off the debt. 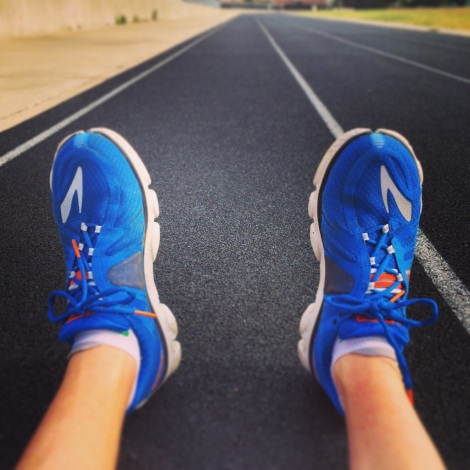 He tweeted me in jest after the final game and said he’d like to see my splits from the track.  Well, I don’t run with my phone (camera), so I just tried to keep track in my head.  Best I could make out with my math skills were that it went something like this:

It was tough.  The winds were between 25-30 mph, with gusts much stronger than that.  The whole back side of the track was a wall of wind and it felt like I was running in place.  Hopefully that made me a stronger runner though.

The flag is holding on for dear life. It’s like that every spring here.

Luckily I forgot to mention to him how the gaggle of my fellow bloggers commented that they wanted us to up the ante with an embarrassing costume, or the opponents team jersey.  In fact, I had planned on wearing my throwback Mavs jersey in spite, but I forgot it at home.

Truth is, I don’t get embarrassed easily, so it wouldn’t have bothered me too much to dress up for it.  You know this if you followed my Dopey Challenge races.

Besides, if I had been dressed in drag like some of your suggested, I might have gotten a visit from the cops as I was running on a middle school track – and their girls soccer team was practicing on the infield.  I can hear the 9-1-1 call now, “There’s a creepy man in a sports bra and tutu running laps at the middle school.” 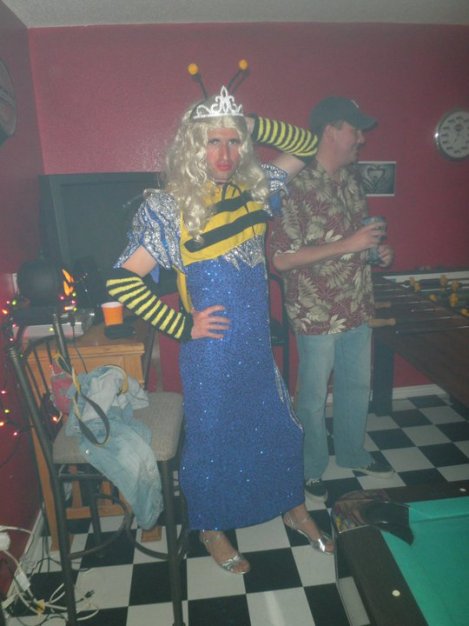 From a Halloween past – The Drag Queen Bee. Or Prom Queen Bee. Whichever you prefer. Aren’t you impressed I found heels to fit me? And a prom dress for that matter?

In the end though, it wasn’t all bad.  Sure, I’m disappointing that my team didn’t win, but hey, I got a good workout out of it!

How bout y’all?  Lost any wagers lately?  Dressed in drag lately?  Besides my blogging friend at hellyontherun (who let’s me know via Twitter) is anyone else interested in the NBA playoffs?  Anyone want to go to the prom with me?

I’ve mentioned it before, but I love Thursdays.  It means I’ve finished another work week’s worth of workouts (yea, rest day tomorrow!).  Today I was up early to run 4 miles, then a weight session this afternoon.  Is anyone else running in the early morn or the evenings freaked out a little this time of year?  I run the same streets as the rest of the year, but with all the spooky decorations in the yards, I end up doing quite a few double takes.  Luckily though, all the skeletons, zombies, and ghouls turned out to be fake and not real.

This Thursday happens to be my favorite holiday – Halloween!  I love the challenge of coming up with a creative costume.  This year though, I haven’t had a lot of time or brain effort to come up with a good one.  We’ll see what happens tonight though.  I’m sure I’ll recap tomorrow.

But for now, I picked a few of my favorites from over the years and thought I’d share… 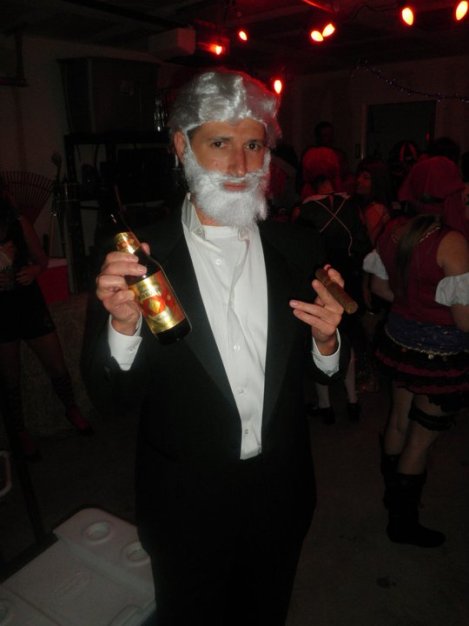 The most interesting Scott in the world. 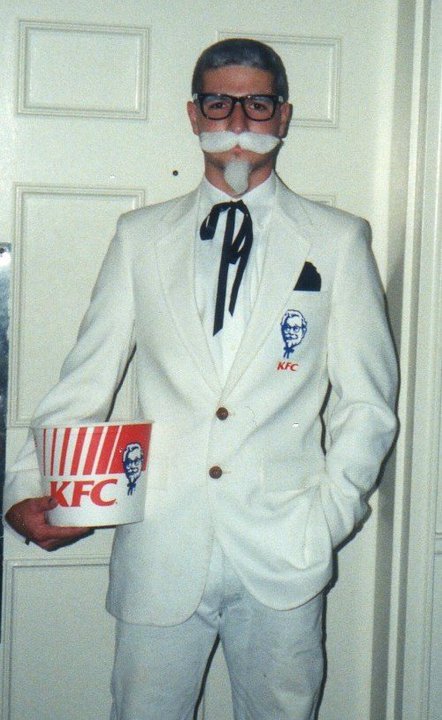 The colonel. The bucket doubled as a beer cup. 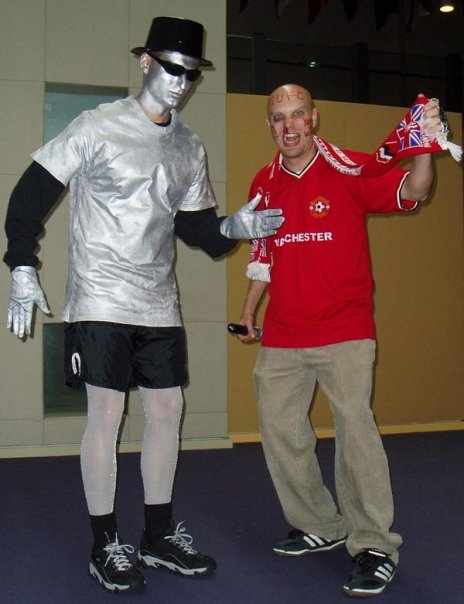 The touristy part of a city’s robot street performer. 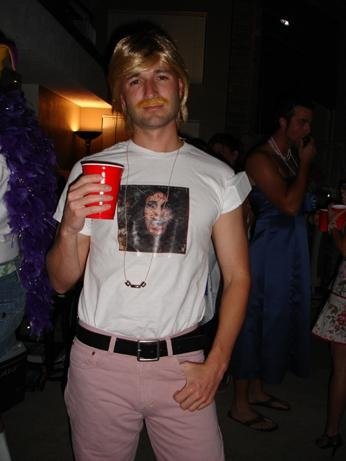 So there you go.  Some more creative than others.  My fave is the McConaughey one – it looks simple, but it took a TON of work to put it together.  It paid off though, I won two costume contests that year!

What about you?  What are you going to be this year?  What was your all time fave costume?  Curious – Which of mine do you like the best?