Playa playa, what it is? Been another crazy week! So busy! I still have…not one…not five…but TWO race recaps I need to blog. Hopefully next week!

For now, let’s just look at some pictures of some of my Chicago Marathon training from some of this week, shan’t we? 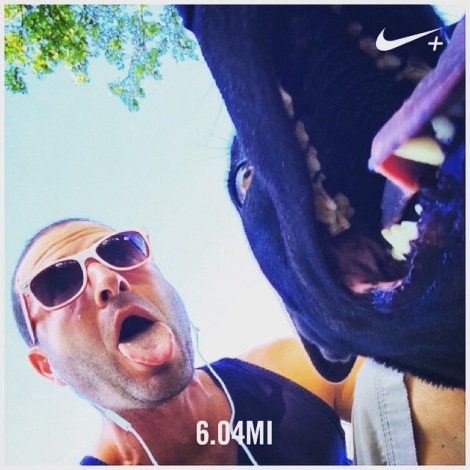 That’s not a real waterfall, that’s just my actual sweat dripping down the stairs.

I choo-choo-choose to have some fun in my marathon “train”ing.

To my chagrin, she wasn’t pumping water, she was churning butter.

Oh hey, look, I even have some moving pictures from the morning of those last two pics…

Here we are just over halfway through the month and I’ve already run almost 90 miles! Woot woot! So the training is so good so far.

It comes to us from the FIRST RACE I attended last weekend. I love this pic…

So much going on here.

Here’s what had happened: You see us all laughing in the background? Well that’s cuz that gal had just  chicked that guy and we yelled at her to keep it up all the way to the finish line (about 50 yards away). Then our buddy Josh (in orange) yelled at the guy to not let her beat him. The guy paused for a second, weighed his options, then started yelling out profanities before taking off on a dead sprint! It cracked us up.

More miles and hopefully more dope pictures this weekend! I’ll share on Monday (& hopefully have those other two race recaps too!).

How bout you? Climb any statues lately? Ever curse during a race? Did I miss any other caption puns?