What a whirlwind! My head is still spinning. So much happened, so much fun at the the Mavs Run This Town 5k.

The Mavs Dancers asked to take a photo with me, I obliged, and taught them to ‘leg pop’.

This race took place at 7:00 pm outside the home of the Dallas Mavericks – American Airlines Center. One advantage: they let us use the restrooms inside (instead of the normal race porta-potties).

The scene of the time.

This course ran around downtown Dallas after dark. I hadn’t run a night race in a long time, but luckily my morning runs are in the dark, so I was used to having to use my night-vision.

Not a bad view.

Unfortunately there were a few sprinklers going off along the course, which left some slippery spots on the roads. There were also a few little hills, and it was surprisingly windy…but not too bad.

The course was mostly spetcator-free, save for some people yelling at us from their apartments and a section with Mavs entertainers. That said, I still had a lot of fun and even ran within one second of my PR that I set last month.

They had laptops where you could look up your time. Very convenient.

We also had a bunch of friends running this race. It was great hanging out with them at the post race party!

And look, more friends, including fellow blogger from Marathon State of Mind… 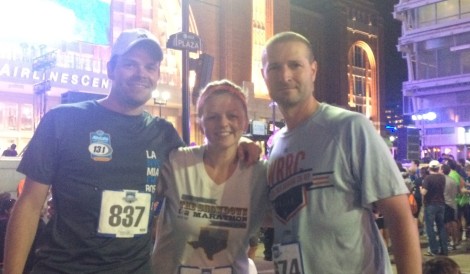 The post race party was awesome – all the free beer you could drink, food trucks, and a concert by Old 97’s!!!!

I didn’t get a pic with my face, but here’s my back. Some say it’s my best side anyways. 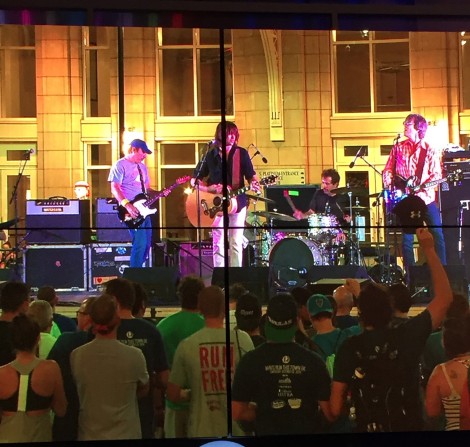 After the show, we even got to hang out with the band for a little while. Such great dudes!

Even the lead singer was cool enough to hang out with fans.

In summary, it was a super fun event, and we all had great runs and a great time! Bonus – each runner gets a ticket to a Mavericks game…score!!!

But now I gotta rest up – I have a half marathon in the morning!!! Woot woot!

How bout you? Any recent night races? Bump into any celebs recently? Who’s also racing this weekend?