(subtitle – Part 1 of why I’ve been MIA recently)

Hello All! Apologies for being gone the past few days, but it’s been wacko around these parts! Lemme splain.

First off, I had a pretty cool opportunity the other day. I know I hinted at it on my post last week about having a big secret thing going down that I didn’t want to jinx. Well it did go down…kind of.

Here’s the dillyo: I’m a huge Jimmy Buffet fan. I’ve been going to his concerts for 20 years. I’ve probably seen him live over 25 times – everywhere from Ohio to Vegas to Dallas to Charlotte. I listen to his music, read his books, eat at his restaurants…the whole nine yards.

At one of my first Buffett shows back in the day.

So when a fellow TV producer friend called me and asked if I wanted to work behind the scenes on a broadcast of a history-making concert of his, I was like, fo shizzle.

Just a couple of melon heads at a Buffett show a couple years ago.

But runners – don’t worry, I still got in four sweaty quick miles before heading to the show.

Anyway, he was playing a groundbreaking concert at a local drive-in movie theater that was simulcast at other drive-ins around the country. My job was to help shoot and edit a pre-show video for the broadcast. To do this, I needed pretty much an all-access pass. Security was no joke, and so I had to wear credentials out the wazoo.

Credentials part 2 (believe it or not, I had on more that I didn’t take photos of)

Now if you don’t know about Buffett concerts, here’s the thing – a big part of the experience is the pre-show tailgate party. These people go all out – you have no idea! The pre-show fest can last up to three days!!! In fact, many people just go to the party and don’t even make it in to the concert. 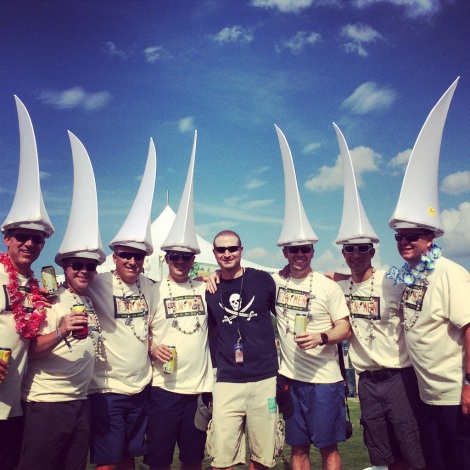 Some of the tailgaters – the fins light up at night.

I was going around getting footage of the tailgaters and met some cool peeps.  Not only the partiers, but I ran into a few other friends who were also working the concert – including model, actress, singer, and buddy of mine – Brooke Becker.

It had been a couple years since we last worked together.

One cool thing was that when Jimmy and the Coral Reefers came out to play their sound-check, they decided to play a mini-concert for the tailgaters there. That was cool of them, and I enjoyed it too!

My big secret hope was that I would get to meet Jimmy. And I came so close. I was within about 10 feet of him, but his security was no joke (like I said). They weren’t having it.

I came close a 2nd time when a person from Buffett’s inner circle said he’d take me to meet him, but again, security denied us. I understand they were just doing their job – in fact I chatted with his security later and they said they’d been working with him for 27 years. They have their system down!

This is NOT an uncommon sight at a JB concert.

However, during dinner I did get to eat with the Coral Reefers!!!! So cool! I spoke with a few of them and they were very cool. I thought it was bad form to ask for a picture, but I did sneak a pic of the food they had catered. It.was.so.amazing.

So so so so good!

Jimmy and the band are pretty healthy, if you can believe it. Steamed veggies, polenta lasagna, baked grouper, etc. So so good.   I also read that JB can be found doing yoga before his concerts in his dressing room…Probably why he is still able to play concerts all year long at his age.

Anykitandkaboodle, we got the video done with minutes to spare (whew). And security allowed me to watch the first few songs with them up against the stage!

In front of front row baby!

After that I was done working and was able to relax and enjoy the show from the VIP section right in front of the stage. Dancing with strangers and loving life.

So that is Part 1 of why I’ve been MIA from here the last few days. Coming up tomorrow – Part 2 of where I’ve been.

SO, what have I missed? What’s everyone up to? Are you a huuuuge fan of anything – band, celeb, author, TV show, etc and how close have you come to meeting them?