Head for the Cure 5k Review

Sorry for the delay in this review, I’m sure you were holding your breath.  Exhale, it’s here.  This 5k was alright.  There were more people than I expected – over 1000.  The weather was unseasonably cool, though a tad windy, but not too bad.  The course was relatively flat, save a few hills just after mile one.  The course was fairly scenic too, as the last half of the course meandered on a paved trail through the Oak  Point Nature Preserve.  I’d never been there before, and the part of it we ran through was nice.  I’ll have to explore that park some more on future runs. 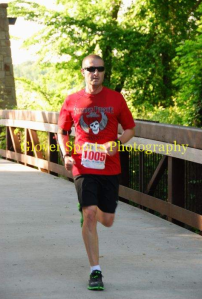 Takin it to da bridge!

As you can see in the photo, I wore my Flying Pirate 1/2 Marathon shirt.  I was so happy to do so – you see, my flight home from that race resulted in my luggage being lost…for nearly a MONTH!  I finally was able to retrieve it the night before the race, and reunited with some of my fav running clothes, along with my new shirt, I was joyed to put them on for this race! 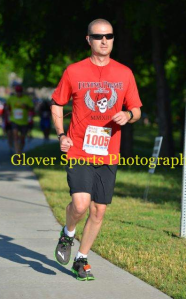 Hoping the shirt would give me wings too.

Anykitandkaboodle, the combo of the weather, the course, some secret inspiration, having my gear back, and having done some track work, I was able to turn in a decent finish.  I came across at 22:12 – little over 7 minute miles.  I was 4th in my age group and 29th or 30th overall.  This gives me hope, because it’s 20 seconds faster than my last 5k a month ago, and I had been sick the week leading up to this race.  I guess being sick was like a taper?  Taper for a 5k – I wonder if I can sell people on that idea?  Haha!

I don’t normally run with my arms crossed – I was reaching to stop my stopwatch at the finish line.

The race is called Head for the Cure because it raises funds for brain cancer research.  I guess it affects more people than I thought because there were lots of signs on the course and people wearing shirts dedicated to who they were running for.  I hope it was considered a success for them.

Anyway, not much more to say…just another 5k.  Yes, that does rhyme.  Until next time, enjoy some extra photos from the race.  Peacey peace! 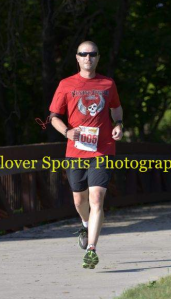 2 thoughts on “Head for the Cure 5k Review”